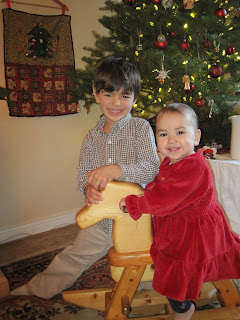 Ah... Merry Solstice Season... 'tis the season where we fight our seasonal depression (from sunlight deprivation) with shopping, gifting and food.  It is also the ultimate Mommy Olympics, as mothers everywhere find themselves juggling the additional roles of Santa and Martha-Stewart-esque decorating, cooking and cleaning.

Though I do have to admit that I am lucky, the gender imbalances in my life are more related to my stay-at-home-lactation than traditional roles. The men in my life took over all the meals!  I got Christmas Eve, Christmas Day and Boxing Day off from cooking.  Even so, I still had the role of the silk sails that moved the ship of Christmas cheer safely through the holiday season.

And my daughter's nightly vigil certainly don't allow me much time rest.  She is up hourly, standing in her crib calling "Mama-mama" and desperately pumping her hand in that familiar sign for "milk".  Her only other word is "hi" and she uses it as her a mantra for constant socialization.  It has served her well in this busy season. 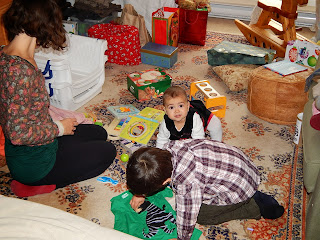 Now a small story of something than has made my Neuroscience-scientific side go hum: After nearly a year of evening colic, and several months of horrible nights I decided to try a (highly recommended) homeopathic doctor. I was doubtful, but our extended health covered the appointment costs, so I decided (after having tried everything from diet, drugs, massage, chiropractics and behavioural training) it was worth a shot.

An administration of phosphorous pills after our first appointment immediately stopped the evening crying and gave us our first 4 hour sleep in months.  It only lasted about a week, but after several nights of no sleep we gave Uliana a second dose... and another miracle was wrought.  Once gain it only lasted about a week... and after several nights of crying and poor sleep, I have just given her another dose, hoping that it really is a miracle cure and tonight I will sleep.

(And for the record a bad night with Uliana is an hour of crying after her first wake up at 8pm, then up every hour, followed by another hour of crying from 2-3am.  A good night involved only one bout of crying, and 2 hour sleeps; so the homeopathic pill resulting in no crying and 4 hour sleeps  is a miracle.  And my logical brain can't imagine that it's due to a placebo effect, as Uliana certainly wouldn't know the difference between 200 CH phosphorous and the conventional pain killers.  However, after my year of all-night-raver style sleeping I'm not sure I have a logical brain anymore!)

Now a yummy seasonal breakfast treat.  Here is a spread that is rich, naturally sweet, yet a healthy addition to pancakes, or panettone. 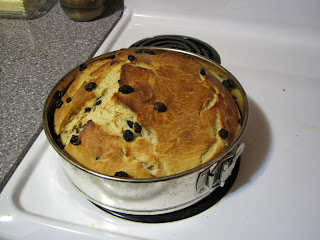 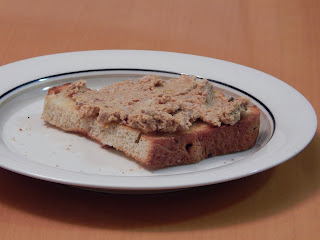 And to finish off, here is a picture of our stocking hung by the staircase with care.  We made the hangers by reshaping cheap metal wreath hangers. 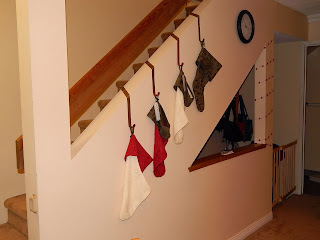 We're gonna have a good time! 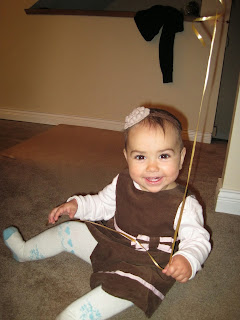 The subject of what to do about Uliana's birthday was something we started worrying about before she was born.  I tried everything in the book to get her to arrive before December 10th... then after that, I worked on having her arrive late... all in an effort to avoid a Christmas time birthday.

Who knows what day she would have naturally chosen to make her grand entrance, but as it was she was born on December 22nd.  Close enough to Christmas to have everyone in a holiday frame of mind and not a Birthday party frame of mind.

The pressure was on.  We needed to figure out what to do for her birthday. We interviewed the (surprisingly many) people we know with a Christmas birthday.  We weighed all the options and chose something that fit right with our family.

With a Birthday right in the middle of a holiday season replete with tradition, big meals, indulgent desserts and copious gifts we decided to honour her birthday in a way that celebrated her with her own set of Birthday traditions.

We steered clear of our usual Birthday traditions.  I didn't throw a party, bake a cake or give her presents. Instead we bought her a foil balloon and a fancy cupcake, dressed up in our finest clothes and went out for a fancy dinner.  All three of those items are things that we NEVER do, thus assuring the specialness of the event.

"But wait!" I can hear you cry. "What about balloons, friends, goody bags, gifts?"  And I have to agree. Who doesn't like a good party?

For now Uliana will have a Celebration Day (or perhaps her Queen's Birthday?) on April 22nd.  Look for your invitation to her 1st Celebration Day for sometime around the end of April! 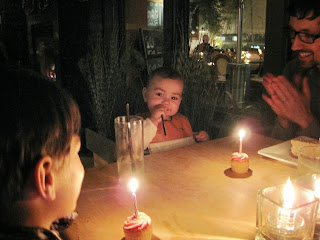