But I really, really don't have time to blog.

Or I do, but only if I there isn't something more pressing

My life is fully packed.  So I'm often forced to choose between blogging, or say... showering.  (Ok it's not really that dramatic, but it's nearly that dramatic).

It's the thing about having two kids... in very different age groups... I basically am fully busy with each of them... all the time.

And the truth is that I started to write this blog 2 weeks ago, and am only now getting to finish it!  So my blog will be spotty over the next little while... (to say the least) though I want to keep posting recipes!  I suspect that will simply fall on the long list of things I want to do. (Read, knit, garden, paint, finish the laundry... I mean ACTUALLY finish the laundry, not just skim off the top so that the kids look clean enough to be allowed indoors.)

Here is a picture of Uliana helping out by unloading the groceries from the cupboards. Above is Nikolai and Brad sharing an academic moment.  Actually scratch that... blogger doesn't feel like uploading that photo and I've got to collect Nikolai from school (and wake up a sleeping baby... the burden of being a little sister.) 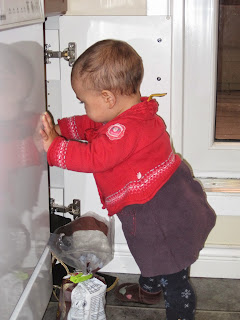 The messy time of life 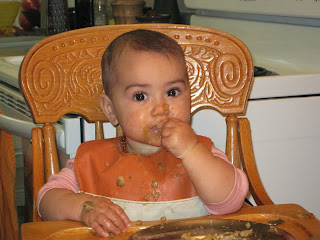 Uliana has quickly grown up and for the most part she is no longer eating everything on the floor.  She's onto a new phase of baby existence... in this phase there is only one requirement... she must feed herself using only her fingers...

There are a few side effects to this phase. For example sometimes she is required to eat naked. 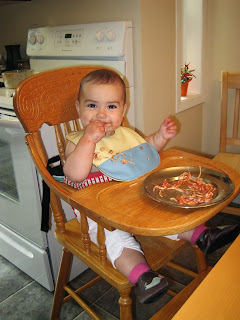 The moussaka that everyone knows (and loves) is generally made out of ground lamb and eggplant. However, moussaka is traditionally made with all sorts of vegetables.  My version is made with lentils.  This is a complicated dish, but my version is quicker to put together and tastes like the real thing!

Base:
Cook 2 cups of dried lentils until they are soft.  Meanwhile saute 1 cup of onions in olive oil.  Add in 6 cups of roughly chopped mushrooms (or other vegetables) and continue to cook until they give up their liquid.  Then add in cooked lentils, 4 cups crushed tomatoes, 2 cloves of garlic, 1 tsp oregano, 2 tbsp parsley, 1/4 tsp cinnamon, 1 bay leaf, 1/4 tsp pepper and salt to taste (I use 2 tsp).  Continue to simmer until most of the liquid has cooked away.

Meanwhile make the Bechamel Sauce:
Whisk together 3 eggs and 2 cups of milk, then set aside.

Melt 2 tbsp butter in a pot. Stir in a 1/4 cup of flour and whisk into the butter until it forms a smooth paste. Slowly add the milk mixture whisking continuously.  Continue to whisk and cook until it thickens.

Put the base of vegetables and lentils into a large baking dish, then top with a 1/2 cup of grated Parmesan cheese, followed by the bechamel sauce.  Bake at 400 F (180 C) for 30-45 min (until top is nicely browned).

(Photos to follow as the children had a meltdown while I was trying to make the bechamel and I didn't bother to thicken it properly.  Still tasty, but not as photogenic.)