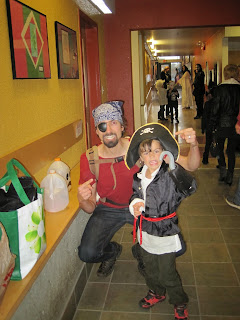 Sometimes it's hard to be a responsible grown up.  The weather is too nice and playing is lots of fun.  So, I'll start by admitting that I didn't get through all the boxes last weekend... and I tried really hard to unpack this week, but I still have about 10 boxes left!

However it was only punctuated by a  week made me wonder at my ability to be the person in charge... and it wasn't just because I didn't get my chores done!  There was the fact that Uliana ate a leaf off of the philodendron, which I discovered after calling poison control is poisonous... she also ate a bunch of mud, playground wood chips and likely some stuff I didn't see.  Every time I fish the offending substance out of her mouth, so she is fine... besides the kid seems to have an iron stomach... for everything inedible (I still haven't tried eggs again).

Then there was the fact that I found Nikolai doing a handstand over a bathtub full of water (that one made me scream in fright, which might have been the wrong reaction because he subsequently demonstrated his skills to a much more calm Brad).

Just trying to get Nikolai to school in the mornings (with Uliana in tow) requires a juggling act that usually involves me dropping a few balls... (you needed that letter signed and returned today??!)

At the moment I'm blaming the move, teething (Uliana's got 3 new teeth this month), too much caffeine or not enough caffeine... ah well... I think it's part of being a parent with young children.  As much as we may look like we have a handle on everything... we probably don't... however if a miracle occurs and we momentarily DO have a handle on everything, it only last as long as it take for your 5 year old to decide to step in the bin of flour (to see what it feels like) and for your baby to figure out how to pull out the outlet covers (we had to buy a whole new set this weekend, because she not only was pulling them out, but trying to put them back in afterwards).

However, I have my super human moments too... so Voila a family themed Halloween costume put together in just one week for the Hallowe'en party at Nikolai's school.  Can you guess what we are from the photo above?

And a recipe for a seasonal Irish bread (most stores seemed to have a tons of these for sale at this time of year). 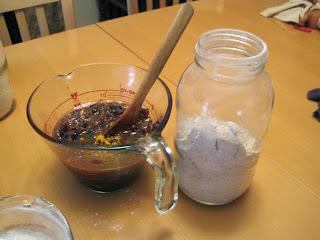 Brew up 1 cup of strong black tea.  Use it to soak 3 1/2 cups of dried fruit (raisins, currents, chopped dates, prunes) for at least 1 hour.  If you like you can replace 2 tbsp of tea with whiskey. 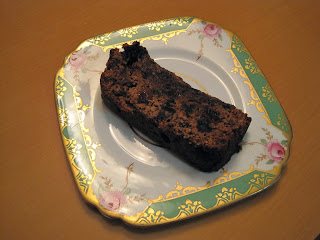 And here is another party pic.  Getting these costumes together was chaotic... but if you squint your eyes and use your imagination, I'm sure you can guess which storybook (and movie) we're from! 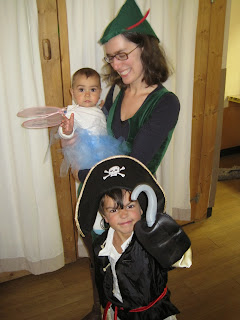