Bicycle races are coming your way

This month we have been kept very busy with two MAJOR projects.

The first belongs to Brad... who completed the 140km Tour de Victoria cycle race last weekend.  (Though it was Brad's accomplishment, he couldn't have done it without my support!)  The prize is for finishing... though he deserves a prize for changing the most tires... two of his own flats and stopped to help a friend with a third flat! 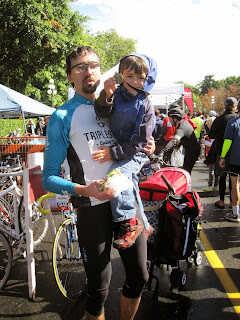 And here is the final clue to our other big project. 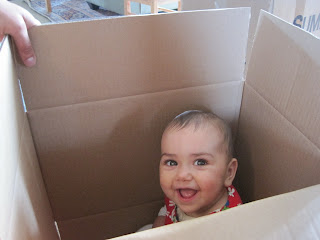 We will be moving this weekend!  (This was mainly my accomplishment, but I couldn't have done all the packing without Brad's support!)

It will be a dramatic change from cold and beautiful heritage house, to a warm and family friendly co-operative townhouse.  We'll lose the big backyard and stained glassed windows; but we'll gain shared ownership and a built in community! 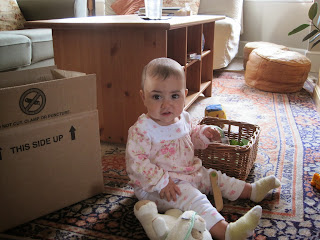 Uliana had a major first this week... (for the record she's still not crawling even as we near her 9th month b-day, and it's not walking, or talking either)!  She had her first illness (an advantage to starting solids in the summer months).

It wasn't a major illness... just 2 days of a low fever without any cold or flu symptoms. However, Uliana is clingy at the best of times... so being sick meant that I strapped her into the baby carrier in the morning, and kept her there until bedtime.  Even at night I wasn't given a reprieve as she would cry pitifully unless she could either lay on my chest or in my arms.

It wouldn't have been such a big deal if I wasn't already strung out and super busy with... well... maybe next week.  However, the picture above of my sad baby does provide a clue.

Now for some comfort food, courtesy of our neighbour.  We're feeding his chickens for a week while he's away... and helping him with the bounty of his ripe tomatoes.  This is a variation of a dish that we ate and loved in Bulgaria. 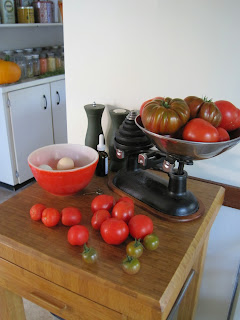 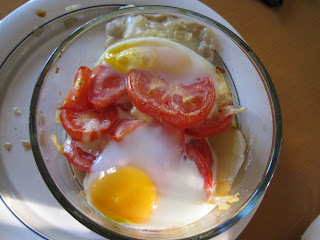 1. Set your oven onto broil and roast 4-6 peppers on a cookie sheet until the skins are blistered and peeling.

3. When the peppers are done peel off the skin.  Then build your gyuveche (any personal sized oven proof dish is good.)  Build a dish for each person. Start by sprinkling down a thin layer of the cheese mixture, topped by 1/2 the tomatoes, a layer of peppers and top with flavors (fresh oregano and parsley, salt, pepper and chill flakes to taste).  Then put on the remaining tomatoes, topped by the remaining cheese.

5. Serve with a crusty bread to dip into this delicious and comforting dish! 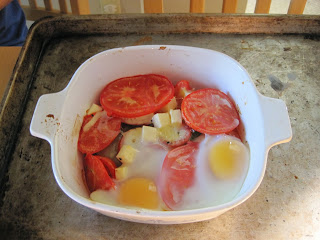 So how does our car free family make the 2 km commute to and from school every day?

We could walk it... but that would be exhausting for Nikolai and time consuming.

And before I give away the answer let me distract you with a picture of Nikolai's lunch box. 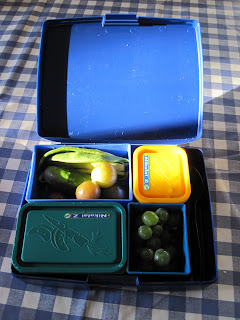 Ah, so pretty.  Gone are the days of sandwiches wrapped up in wax paper.  Nikolai has homemade homous and naan, and the veg are all home grown.

So how does Nikolai get to school?  In a very styling bakfiet! 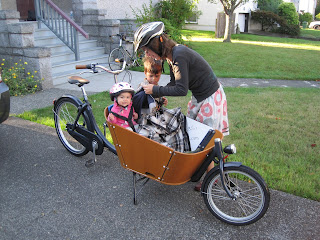 We needed something that would be safe for Uliana (still only 8 months), yet spacious enough for Nikolai.  Voila the Babboe City Bike.  After three days of commuting this way: Uliana no longer minds wearing her helmet, Nikolai enjoys waving at the tourists, and my arms and legs are starting to feel it.

Our route may be short, but it involves many up and down hills as we climb over Beacon Hill to the swamp of Cook Street, back up again on the other side.  (and I'm not being rude by referring to Cook Street as a swamp... because it used to be a salt water swamp!)  Luckily the gear ratio on the bike is quite high so I have no problems making the climb.  It's a fun way to ride, and has a "rain tent" for those days when it's not so warm and sunny. 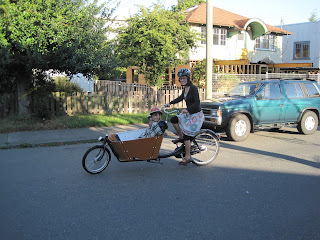 Posted by Emillie at 3:10 AM No comments:

Numbers, letters, learn to spell; nouns and books and show and tell. 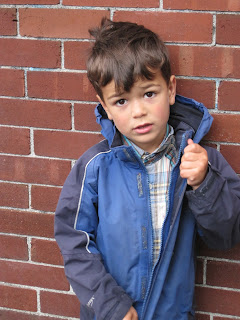 Yesterday was Nikolai's first day of school.  And he was SO ready, mainly because he was really tired of hanging around with Uliana and I all day!

He came home full of stories about recess, snack/lunchtimes, the teacher who kept talking in French and his first French word... Bonjour!  (Though he isn't yet aware of it, he already has several other words in his French vocabulary that I tend to use around the house.  Most of them are commands... it somehow makes me feel less like a "nagging mother" to nag in a second language!)

Now despite my wish to reflect upon the sensitive and thoughtful soul that Nikolai has (and how the cruel school playground might break him of that sensitivity!!) I am far too busy with... well... I'm going to save that for yet another blog (excitement, excitement)!  For now I have to be confident that any adversity in the schoolyard will simply breed resilience.

I don't even have time to blog a recipe. I am ever so far behind... and there is so much to do!

Above is a picture of Nikolai on his way to his first day of school... and below is Uliana enjoying the dinner out celebration.  Both of them were too full of the moment to make a camera face for me. 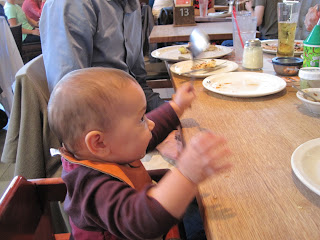