Uliana will not eat Green Eggs and Ham 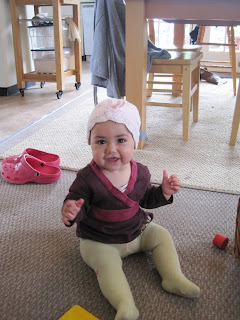 The last week of summer left me with little time to relax.  There was school supplies to be gotten (Nikolai didn't even own a pair of shoes(!) let alone a lunch box or any thing else that he'll need next week).  There was more pickles to be made and apples to harvest.  We are also in a flurry of activity around something that is... perhaps... best left for another blog. (This is my attempt at building excitement through the use of anticipation.)

But Uliana actually provided for most of this week's drama.  The problem was related to a hard boiled egg.  Like most dutiful parents, we followed typical advice around introducing eggs yolks as a good source of iron, protein and fats.  General wisdom suggests that egg whites are allergenic and may require a later introduction.

So we followed all advice and gave Uliana a few spoonfuls of hard boiled yolk mixed with water.  She responded by vomiting three times, which was followed by 48 hours of diarrhea, and an associated diaper rash that was so bad that her skin started to peel.  I thought I'd seen everything as a parent... but nothing prepared me for that.

We saw a nurse, a doctor, a naturopathic doctor and a dietician.  They all had the same comment: no fever and she was in a great mood (even tending towards hyperactive)... so it was definitely food related.  And for some reason they all suggested that we try introducing yolks again in one month... but I'm too traumatized to even consider the possibility.

Above is a picture of Uliana on her way to another doctors appointment.

And below is a picture of Nikolai's creation... is it a tent or a cage?  It's all up to your interpretation! 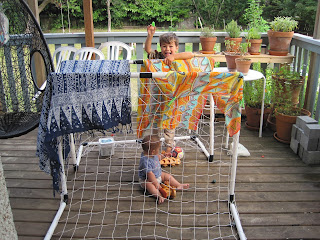 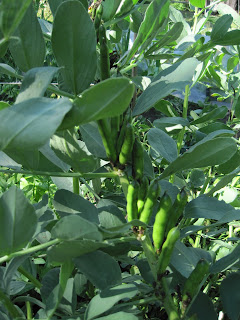 This year we grew broad beans as a "green manure" cover crop, but in the spring we didn't have the heart to plow them under.  Instead we waited until they were setting fresh young pods, then we spent one month eating them.  And despite all of the bad press about how bitter and tough fava beans can be, ours were soft and buttery when eaten young and fresh. 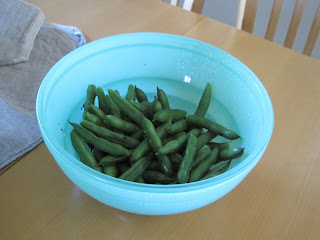 Simply grill or steam the whole pod of young beans until they are tender.  Toss in coarse sea salt, and eat like edamame by shelling the bean with your teeth. 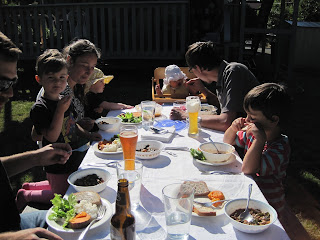 This is an Italian stew that tastes great served with fresh bread.

1. You will need about 2 kg (4 lbs) of fresh young broad beans still in their pod. Shuck them as you only want to use the bean for this dish.

3. Season with red pepper flakes, salt and pepper to taste.  Simmer for about 30 minutes, or until fava beans are tender.

4. Serve with a drizzle of olive oil and more parsley.
Posted by Emillie at 5:18 PM No comments: 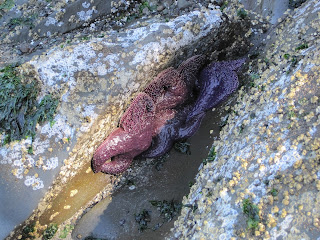 We've had a relaxing week set to the pace of island time.  Pender is one of the small islands that pepper the waters between our Big Island and the rest of Canada.  Like most (all?) of the small islands it is a haven for organic farmers, musicians, writers, artists and ocean seeking vacationers.

As such, the true "islanders" at the farmer's market scoffed at my "big city" ways.  I needed to slow down my pace of shopping, chat with the farmers and enjoy being on island time.  It was a pace that reminded me of Maynooth, and suited us all very nicely.  Now we're just left wondering if our budget would stretch far enough to buy our own little piece island! 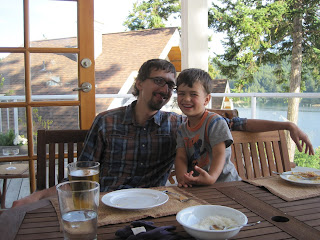 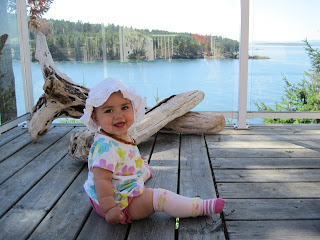 Taking a hike with Auntie Claire. 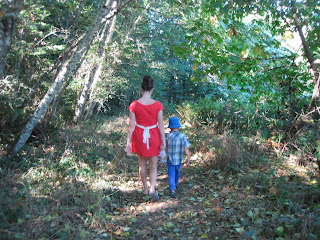 And to embrace the hippy side of Pender Island I am doing a second blog on the most hippy of activities... SPROUTING!

I did an earlier blog on sprouting for salads and sandwiches, but this blog is something altogether different.  After Uliana's fussiness to any beans that I ate (through my milk) this spring, we switched to eating lentils.  When I was chatting about this with my doctor, she suggested that I try sprouting beans.  It worked great!

As it turns out, sprouting beans before cooking them has all sorts of advantages.  Basically it turns the complex "starchy" storage carbs in beans into easier to digest "vegetables" carbs.  It also gets rid of enzyme inhibitors that help them to store well, but aren't so good for us to eat. So sprouting makes beans much easier on our digestive system, it helps to beef up our vegetable load (who couldn't use some more vegetables?), and it makes the proteins more readily available for the body. 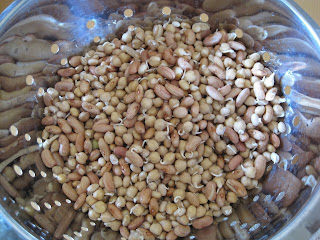 **Major Note** I'm advocating sprouting beans prior to cooking.  DO NOT EAT RAW as some beans are toxic once sprouted. (Lentils, Mung Beans and Chickpeas are exceptions).

1. Soak beans for 8-12 hours as normal
2. Drain beans and leave in a colander on the counter.
3. Rinse 2-3 times a day until sprouted. (1-3 days depending on the freshness of the bean.  If your beans don't sprout in 3 days then they are OLD.  Try a different source the next time.)
4. They only need to just be sprouted in order for the carbohydrates to be converted, so cook and use as normal!

I have sprouted everything from lentils, chickpeas, navy beans and pintos with success.  I had a batch of black beans that never really sprouted.  But we just cooked them up anyways... 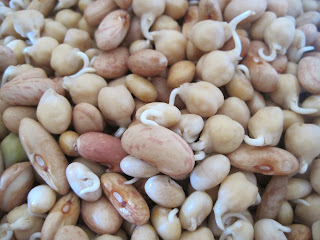 And now that Uliana's digestive system has matured... we still continue to sprout.  It is so much better for all of us that the bit of extra planning required is worth the effort. (Note, the pintos are just starting to sprout, so they are ready for cooking.  The chickpeas and navy beans were quicker to sprout, but the long tail wasn't a problem for our bean salad.)

Gonna eat me a lot of peaches 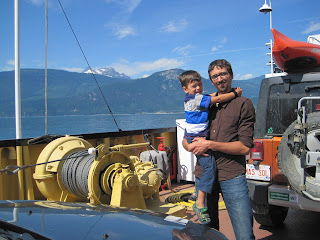 On our way home from Castlegar we spent a few nights with friends in Kamloops, playing with their kids. Then we spent a night in Vancouver with Grammy. We took the Upper Arrow Lakes Ferry (above), and visited Gort's Gouda (below). The trip was relaxing. 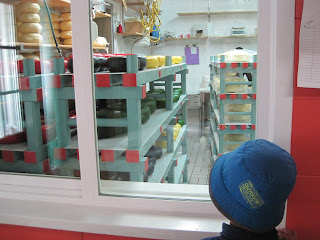 The scene that confronted me on Monday morning was anything BUT relaxing.  A mound of laundry erupted from the laundry basket filled our bathroom floor and tumbled out in the hall.  The children were both keyed up by the trip away and Nikolai needed some social time to calm his frenetic squirreliness.

I was also confronted by the paradoxical situation of an empty fridge, but a backyard teaming with veg.  The effects of seasonal abundance were compounded by a delivery of 10 lbs of peaches, and 20 lbs of blueberries (ordered from a friend early in the season, with a delivery date based on ripeness).

Last year everything ripened over the Labour Day long weekend... and I had planned our holidays this year with that expectation.  However, the good weather this year has meant that crops are bursting forth a full 3 weeks early.  Which just happens to be right in the the middle of our vacation time.  Monday morning had me quaking in my sandals... would I be able to deal with all the food, the crazy kids, the laundry and get us packed up for another week long trip?

Monday we canned the cucumbers in to pickles and grated our over-sized zucchinis into freezer containers.

Tuesday we canned the peaches.

Wednesday we froze blueberries and made Green Gage Plum jam.

Today we peeled and froze apple slices and made another batch of jam.  (It was a good year for plums).

Phew! The suitcases are packed, and my next blog will come from a much smaller Island where I will certainly have the time to relax. 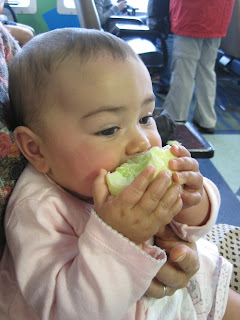 Now for a recipe that will help fuel all manic episodes of summer harvest: 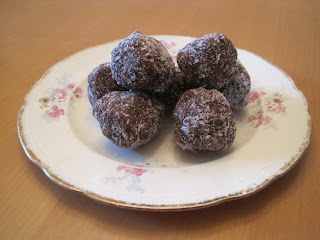 These were introduced to us by my friend Heather, when she dropped off a batch shortly after Uliana's birth.

Process until fine: 1 1/2 cups dates, 2 cups coconut, 1/2 cup ground almond.  Add 1/4 -1/2 cup of cocoa powder, 2 tbsp coconut oil and 1/2 tsp vanilla.  Then add enough honey to make them stick together (about 2 tbsp depending on your dates).  Roll into balls and cover with flaked coconut.
Posted by Emillie at 2:48 AM No comments:

Highway 3 sets off from the town of Hope like a continuously twisting snake as it makes its way up to the Crowsnest Pass.  The first sight of the journey is the pile of rocks that marks the Hope Slide, which is followed by a winding road that circles through the forest of Manning Park.  The towns that are sparsely dotted along the route are counted by passengers eager to get back into the land of radio signals and cellular connections to the world.  First Nation's names are spliced together with their colonial counter parts: Princeton, Keremeos, Osoyoos. 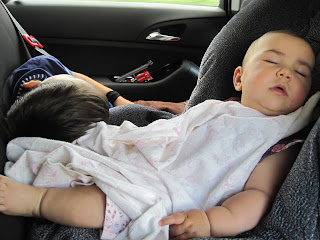 Our first night was in Osoyoos.  The journey was a settled one, with Uliana happy to sit in the car as long as Nikolai and her Mama sat near by. Nikolai's stomach was eased by a pair of sea sickness bands. Thus we survived the first set of mountain climbs to arrive in a dessert. 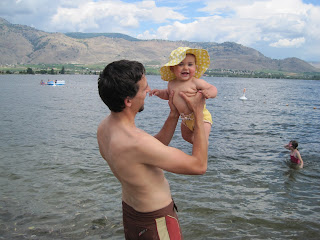 Osoyoos is a land of hot dry heat, a large fresh water lake, wine, fruit trees and a plethora of motels to go with it.  It is a mecca for sun seeking tourists, and the chosen location for Brads brother's wedding.

As it was a second marriage for both Peter and Andrea, they chose to have a small affair, with their children playing key roles in the ceremony.  In the melting heat on a patio at the Nk'mip winery we shared in their special day.

From Osoyoos we continued east to Brad's homeland of Castlegar. It is located in the thick of Doukhobor country. Brad has been introducing Nikolai to his cultural heritage and retelling his Papa's childhood memories. 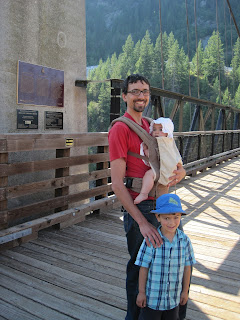 The weather has been hot, so swimming has been interspliced into our daily sights.  At last Nikolai has seen the Doukhobor museum, the Brilliant Suspension Bridge and his Baba and Deda in their natural environment.  He has had a first hand witness to the importance of growing your own food as a means to a peaceful way of life and the power of community to create magnificent things.

Perhaps the most pertinent lesson was an edict that Brad read to him at the museum. "To this day, Doukhobor children are not allowed to play with guns or other violent toys."  Perhaps now Nikolai won't be so quick to declare "but I believe in guns" when we take them out of his playmobil toy sets.

Tomorrow we head back to the coast on a different route... and when we finally get home I will add some photos to this post.

And here are a few more photos of the fun that we had...
at Peter's wedding, 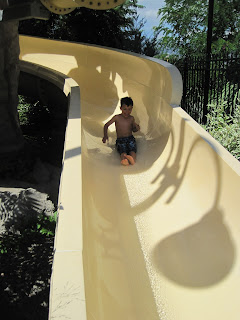 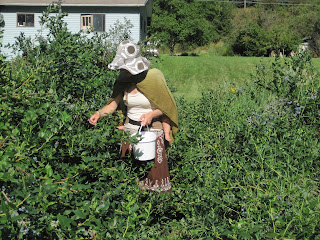 dreaming of a star-studded future, 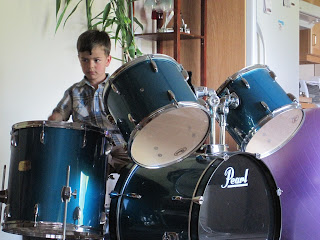 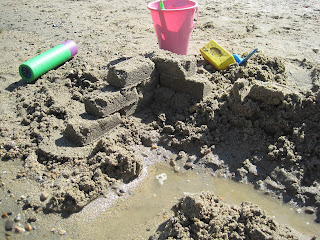 and examining the promenade. 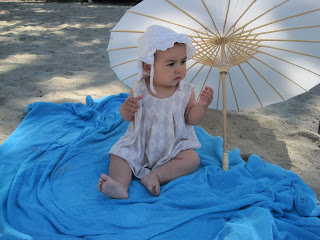 Posted by Emillie at 4:12 AM No comments: