All through the night 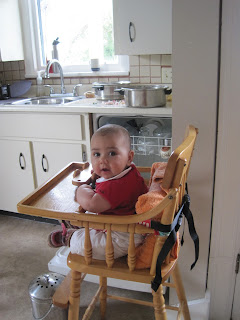 We continue to fight epic battles with Uliana's sleep (or lack there of).  A few things happened this week that "might" help with her sleep.  It's too early to tell, but things have been "better".  (Better deserves to be in quotations, because Uliana slept 4 hours straight last night!!*! before starting her every hour wake up.  However, it wasn't much better for us because we don't go to bed at 7 pm... so starting the every-hour wake up at 11pm didn't really result in much more sleep for me!)

We're under a bit of pressure to resolve this sleep issue because our spare room is soon to be occupied by several waves of visitors.  Gone are the nights where we can take turns sleeping in a different room...  Our waves of visitors are quickly followed by a fair amount of traveling, and we REALLY don't need Nikolai being woken up by the every hour crying!

Naturally I turned to the Internet.  But there is way too much contradictory advice, so we tried co-sleeping, putting her in her own room, swaddling, white noise and every teething remedy known to man; now I've decided to follow the advice of this blog. So, on Wednesday we decided to take away her soothers (hoping to stop her from demanding it to be put back in place every time it fell out.)  That night she cut her second tooth.  I did feel a bit guilty, but we didn't let her have the soother back since we'd already started the process of weaning her off it.

Here's hoping I'm a perky Mama who's been getting enough sleep by next Tuesday!  We'll be heading off to Vancouver to pick some Irish friends up at the airport... It's not the trip to the airport, nor the 4 hour journey to Vancouver that I'm worried about... it's my screaming baby waking everyone up at 3am!

Our photos of the week include one of Nikolai at the Victoria version of the Global Rally Against Monsanto.  There's plenty of reasons to protest against Monsanto, but the cause that strikes me to the core is the fact that they now "own" the rights to many heritage seeds.  Though I doubt they can stop hobby gardeners, like us, from seed saving, they do go after farmers. 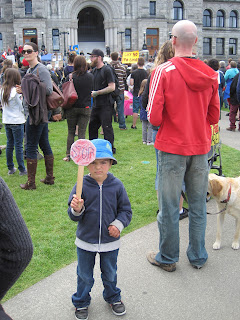 This next photo is Uliana and Nikolai practicing their happy baby yoga move. 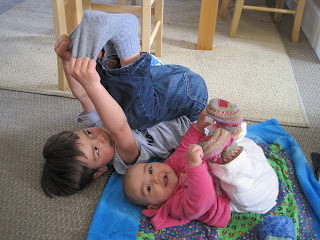 In the photo above, Uliana has her sore mouth look.


Now for a happy recipe (because who wouldn't feel better with a piece of "healthy" chocolate cake?).  I made this for a BBQ last weekend with some friends who are mostly grain free.  The photos were taken on her cellphone... and are pretty good for a phone. 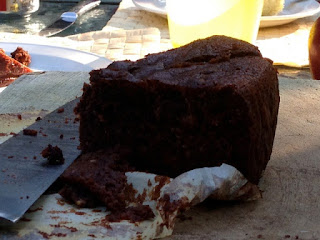 Place 2 small thin skinned oranges (whole) in a pot of water, bring to a boil and cook until soft.  When it is done allow the oranges to cool before cutting them in half and removing the seeds.  Then puree everything (skin and all) in a large food processor.

Add the following ingredients into the processor and blend until it is mixed: 6 eggs, 1 tsp baking powder, 1/2 tsp baking soda, 1 2/3 cups ground almond, 3/4 cup of honey and 1/2 cup of cocoa powder.

Butter and line in parchment a 20 cm cake pan.  Pour the cake mixture into the pan and bake at 400F (180 C) for 45-60 min.  A toothpick should come out mostly clean.  You may need to cover the cake with tinfoil half way through to prevent burning. 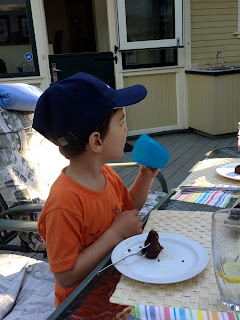