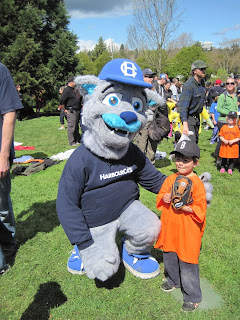 Today is Nikolai's first t-ball practice.  The schedule is a bit unfortunate as it overlaps his normal bedtime, but I'm sure that he'll have no problem staying up late.  Regardless, I decided to feed for success, so today's blog is about two versatile kitchen staples.  Besides Nikolai's gotten really into the idea of taking photos for the blog, so now EVERY meal is "blog-worthy". 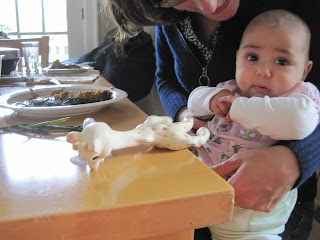 Kale is probably the best thing to grow in a garden.  It is so easy to grow that it's almost a weed, and it's a plant that keeps giving throughout it's life.  The kale most people are familiar with are the big leaves that are sold at farmers markets.  This is the mature kale, and I use it in the place of any cooked green from cabbage to spinach.  I chop it into stirfry's, pasta, quinoa salad, soup and as a side dish all on it's own.  I've already blogged a few kale recipes.

But in the garden kale has several other incarnations... the early kale leaves can be added as a bitter green to a salad.  The late flowering kale is my favorite version.  If picked early enough, the flowering stems of the kale can be eaten like asparagus or a sprouting broccoli.  The stems are soft and succulent (though they do go woody once the flowers start hinting at opening). 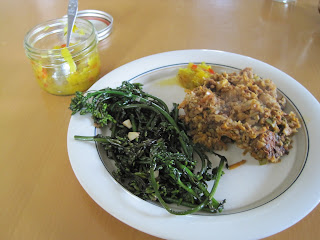 The leaves of a flowering kale are sweet and tender compared to their hearty winter counterparts, and though Nikolai will eat them raw he prefers it when I make them into kale chips. 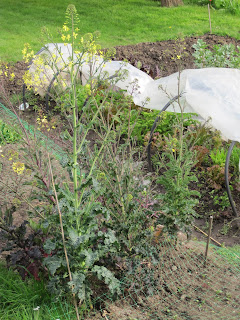 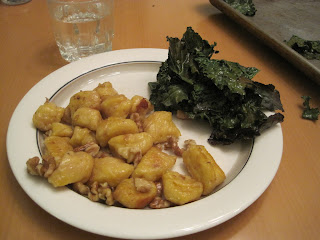 Lentils are akin to beans as a vegetarian source for protein and iron.  However, they have several distinct advantages over beans:
1. No soaking is required (so they are quick to prepare).
2. Higher in fiber, lower in starch and more protein than beans
3. They don't make my baby gassy.
4. As I've discovered they are VERY versatile.  French lentils are good for salads, brown or green lentils make a nice ground meat replacement (about the same consistency) and red lentils perform a magical disappearing act into soups and sauces.

For dinner tonight (featured in the photos above) I made a lentil loaf... which wasn't worth sharing.  Brad's on a small spring cleanse and a lentil loaf without ANY binders or flavour additives was a mushy pile that Nikolai consumed with his Honey Bunny ketchup. 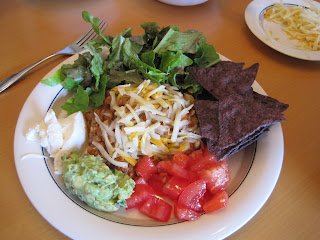 Though beans are more traditional as a taco filling, brown lentils were a quick and cheap substitute for anyone avoiding canned foods.  (There are loads of reasons to avoid canned food... our primary concern is the unlabelled sulfites, but there's the BPA liners and the environmental costs too).

Cook 1 cup of dried lentils (brown or green work best) in boiling water until soft (about 15 min).  Drain and set aside.

Add in 3 tbsp of tomato paste, 1/2 tsp oregano and the lentils.  Add water as needed (just 1-2 tbsp) and mash the lentils until you reach the desired consistency.

How exciting for Nikolai starting T-ball. I know Lochy would have enjoyed it as well. We plan on starting him in cricket in Aug when the season starts. Gav is trialling his first night at cub scouts tonight. They are getting big arent they!