A cake for every occasion 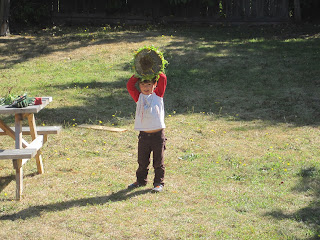 As I've mentioned a few times, Nikolai was discharged from the allergist this summer with a diagnosis of a sucrose intolerance and a sulfite allergy.  She also threw in a few other things like strawberries and kiwi.  It is a very limiting diet. Sulfites are present and unlabelled in nearly EVERY processed food items as well as being naturally present in a number of foods. Sucrose is not just found in sugar, but also most fruits, nuts and seeds as well as starchy foods.

As a result, we were constantly letting Nikolai cheat a little bit on the sulfite and sucrose side of things.  However, Nikolai also had a minor flare up of his symptoms about once a week. So we decided to do a good job of figuring out his tolerance levels.  It is a flash back to May/June, but I am much better prepared, having learned how to cope with his diet over the intervening months.

What we have discovered is that he is very sensitive to sucrose, and can only handle starches as long as he eats less then two servings a day.  He is somewhat more robust to sulfites. Which means that we can use things like mushrooms and canned tomatoes in our cooking, but he still can't handle higher sulfite items like potato chips and olives.

As a result I've had a very healthy pregnancy, because I seldom get the chance to cheat on Nikolai's diet.  It's hardly fair to enjoy a croissant or a brownie in front of a four-year-old that is forced to abstain. On the upside of things, Nikolai has become very good at self monitoring, as we have been conscious in linking every major flare up with the foods that he ate.  He has become so self-aware, that I gave him permission to eat whatever he wanted at a friend's birthday party, and despite the fact that he we weren't there to monitor him, he chose to eat the low sucrose fruits rather than the cake.  I don't take any credit for this amazing level of self-control; I think he honestly understands the connection between eating sugar and feeling poorly.

Luckily, with a little help from the internet, I have been able to find tons of recipes that work around Nikolai's diet.  For Brad's birthday, I made the following sugarless cake.  I will admit that it was a bit time consuming to make everything from scratch, however I made extras of the cookies and we still are enjoying the leftovers. 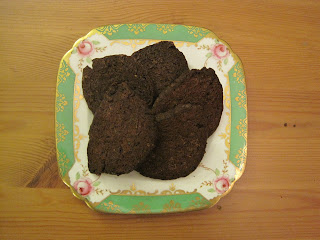 Cream together a 1/2 cup of butter, 3/4 cup honey and 1 tsp vanilla. Whisk together 1 cup of flour, 3/4 cup of cocoa powder, 1/2 tsp baking soda, and 1/4 tsp of salt. Combine the dry and liquid ingredients until they form a firm dough, add 1-2 Tbsp of milk if needed to bring the dough together. 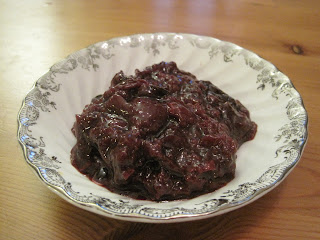 Fruit Sauce is a pretty standard affair around here.  Basically we stew up any fruit we have and sweeten it with honey as needed.  We stir fruit sauce into our yogurt, kefir and hot cereal.  We pour it over pancakes and desserts.  It truly is brilliant stuff. 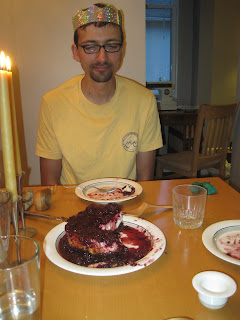 Make a cookie crumb base by mixing 1 1/2 cups of finely ground cookies with 6 Tbsp of melted butter. You can also add sugar or other dry sweetener to taste.  Press it into an 8" spring-form pan (or cake pan).