Is it all for naught?

I am going to open up to the blogosphere to see if anyone happens to have a solution for our current dilemma.  It all surrounds our lovely fireplace: 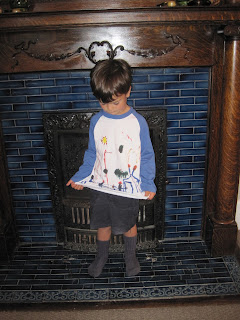 And here it is again, decorated for Halloween. (It's easier to see without Nikolai admiring his own artwork.) 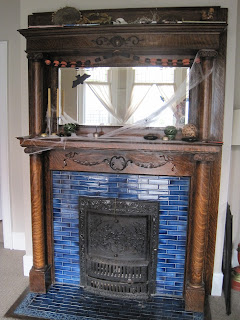 The origin of the problem belongs to Brad.  He spent the whole summer looking at the dead branches on our fruit trees, then looking at the fireplace, before he decided that heating the house with cherry wood seemed like a sensible idea.  Unfortunately there were several issues that made it not such a sensible idea.

Pruning the fruit trees was relatively easy.  Just a morning's work for Brad and my Dad (with a wee bit of help from Nikolai).  What we didn't consider was the fact that even dead wood does not count a "dried firewood".  Our first fire was very smoky, and the wood did not want to burn.  Apparently six months in our basement should solve THAT issue.

However, cured wood will not solve our ultimate issue... that only about 90% of the smoke seems to actually go up the chimney.  And this is the problem we would like some advice on!  Here are the facts:

1.  The chimney was repaired and cleaned two years ago.

2. None of the tenants since then have had fires (likely due to the unpleasant smoke issue). 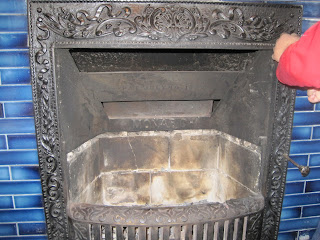 Here are the facts that I know about coal burning fireplaces:

1. They are safe for burning wood as coal burns hotter than wood.  (Though our fireplace may no longer be safe for coal because of it's age. Besides, I'm betting Victoria has a bylaw against burning coal because of the air pollution issues.)

2. It is tiny.  It really can only hold 1 log at a time, so we were thinking of using wax logs (after the cherry wood didn't pan out).

3. Things still seem to burn when the metal cover is on... however it doesn't fit very well, so we still have to deal with smoke in the living room.

4. We have two dampers, both of which we keep open while burning.  There's also a shoot that dumps the ashes into the basement.  We've tried blocking it off to prevent cold air from coming up from the basement, as well as burning with it open.

The only theory we have is that coal burns hotter, and thus more of the smoke would go up the chimney (using the heat rises theory).  Does anyone have any ideas about how we might be able to have a winter fire in our beautiful fireplace?  (A smoky house is not an option that I am willing to, cough, consider).

As a reward for your help, I am going to share a delicious winter recipe. As usual, I forgot to take a photo before we started to tuck in. 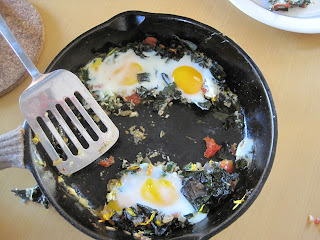 Now I realize that calendula probably isn't seasonal for many people right now... but it just sounds so much more appealing then kale baked eggs.  Lucky for us our nights haven't gotten below freezing, so our culinary flowers are still blooming in full force.  In fact they are the happiest plants in the garden, as even our lettuce has stopped growing. I figure it's because I keep planning on pulling them up to mulch the flower beds.  But how can I touch a flower bed that's still in full bloom?

Remove stems, and finely chop 1 bunch of kale (or chard).  Add to the frying pan and cover with a lid until the kale is tender.  Remove from heat and stir in 1/4 cup of  calendula petals (optional).  Divide into oven proof dishes, make a well in the centre and carefully break a few eggs into each dish (4-6 eggs for the whole recipe). As you can see in the photo, I was a bit lazy and simply cracked all the eggs into the frying pan since it happens to be ovenproof.

Bake at 375F (190C) for 10-12 minutes, until the whites are set and the yolks are still runny.  Sprinkle with Parmesan cheese and more flower petals before serving.
Posted by Emillie at 4:28 AM