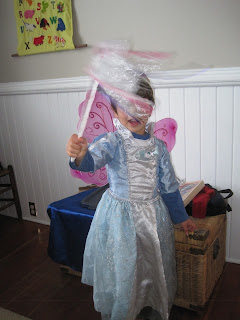 Nikolai's interest in Halloween started right around the end of June.  His choice of costume changed many times over the intervening months.  However, around Labour Day he settled into a final choice... he wanted to be a Fairy Princess.

I should have seen this coming... he loves his princess dress, and he was a queen last year.  But he's really started to developed those strong gender distinctions that all four year olds assert.  For example, as a yoga instructor he has told me that girls are not allow to do the T-Rex move (thrusting out your claws and teeth) we should do the ultrasaurus move instead (stretching up really tall).  However, he's still very much interested in being a fairy princess.

So I was left with a parenting quandary... I really believe in "Free to Be... You and Me", and Brad thought that his choice of costume was perfectly fine.  However, trick or treating as a fairy princess is an entirely different thing from joining in the school parade as a fairy princess (Nikolai's preschool is linked to a grade school). Is it my job to protect him from the teasing of 6 year olds?  What about his 4 year old classmates?

Nikolai does have a strong enough sense of self to be robust to such teasing... but I know that it would still hurt his feelings.  What should I do?

With much guilt, I interfered with his personal freedom and declared that he would wear the cowboy outfit that Uncle Roger gave him to the school party, and wear the fairy princess outfit for trick or treating.  He seems to have adopted the idea and shows a clear understanding of the need.  When the woman at the grocery store checkout was taken aback by his costume plans, he added a modifier explaining that he would also be a cowboy.  When the midwife responded positively to the fairy princess costume he was happy to leave it without such a qualifier. 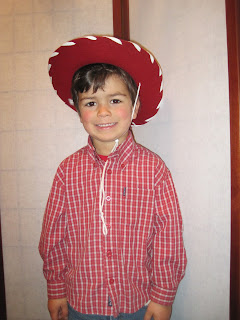 I'll post some photos of both costumes tomorrow.  However, I wanted to blog today because we have been so busy with our Halloween preparations.  Our flurry of cooking and crafting has come about in an effort to decrease the emphasis on candy (which Nikolai can't eat).  We've made sucrose free chocolates, cookies and cake.  I am quite proud of my efforts, and wanted to share! 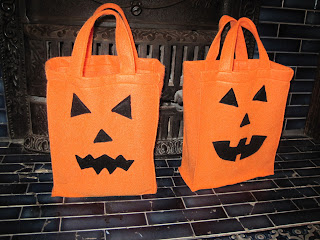 Nikolai's candy will be left in his bag for "The Candy Fairy", who will trade the candy for a toy of his request.

2. The faces were cut out of black felt and were sewn on first (Nikolai requested a scary face).

3. The long piece of fabric was then sewn together, with all the sides of the bag emphasized by top-stitching.

4. The base was fit on, and sewn around on the outside. Since I don't need to worry about raveling with felt, decided to do an external seam to ensure a strong rectangular structure. 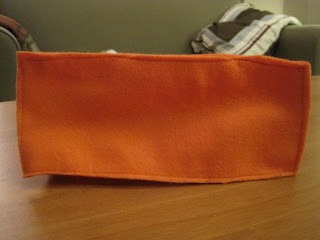 5. The handles were folded in half length-wise and top stitched on either side.

6. The top edge of the bag was folded to the inside, with the handles sewn in at that point. 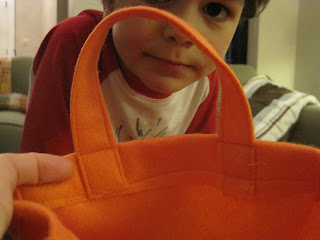 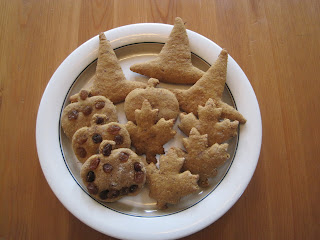 This recipe made a nice orange-ish cookie that was very much like a soft gingersnap.  I think it would be firmer if you used sugar instead of date sugar; either would work well. Dates just happens to be low in sucrose, and honey would have made the cookies too soft. For an exorbitant price, I can buy date sugar at our local health food shop.