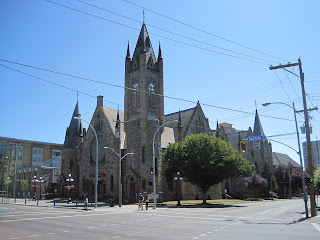 For my birthday, Brad gave me a gift certificate for a tour of Victoria run by the Architectural Institute of BC.  We then looked at our available weekends and found ourselves with out any real choices, so we ended up on an Ecclesiastical Tour (other options include: James Bay, Inner harbour, Fort Victoria, Chinatown and Art Deco).  The tour was pretty good, and had us trekking all over town.  The tour guide was a knowledgeable architecture student, who wasn't opposed to being picked up by one of the guys on the tour. (He managed to talk her into going out for a coffee with him after the tour, so I suspect that she viewed such events as a job perk).

The tours are just $10 each, and all require a decent amount of walking.  Apparently we went on the most difficult walk, and the tour guide encouraged us to bring Nikolai along on the next one. (We'd sent him off to Grampy's house for the afternoon).

As for my review of the Ecclesiastical Tour... well... apparently all the original churches burnt down.  The new churches were all built after the late 1800's, and some weren't even completed until about 20 years ago (you may sit on lofty ground Christchurch Cathedral, but I know that you are newly built on an old cemetery).  Furthermore, we weren't actually allowed into any of the churches.  In the end, I would have to say that our view of the tour was a bit spoiled by having seen so many churches in Ireland.  However, I am keen to try out one of the other tours next summer!

Above is a picture of Alix Goolden Hall (formerly a Methodist Church).  Nikolai and Brad were there for the Victoria Conservatory of Music open house last weekend.  Below is the Church of Our Lord, Victoria's oldest church (and the only remaining wooden church). 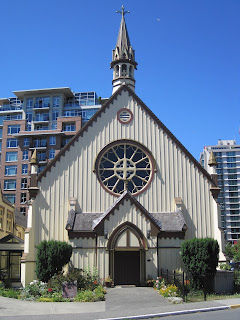 Now for a recipe that is not really related to the blog topic. I have been meaning to share my go-to recipe for a Nikolai friendly snack.  The photo is of cookies we made during the Royal Jubilee Celebrations for Queen Elizabeth.  Claire gave us official HM crown cookie cutters, so we were official in our celebrations!

This is a cookie that stays soft, and never seems to go stale.  However, I will admit that it's not very sweet.  I have tried to sweeten it a bit by glazing it in honey, but that only seemed to make the cookie sticky on the outside.  I think that I will try adding chopped up raisins to my next batch (if I left the raisins whole they would be picked out of the cookie and I would find myself eating the raisin-less remainders).

Preheat the oven to 400 F (200 C).  Cream 3 tbsp of honey and 2 tbsp of butter.  Then beat in 2 large eggs and 1 tbsp of yogurt (sour cream, etc).  Add in 2 cups of rye flour and 1/2 tsp of baking soda.  You can then chill before rolling, but I'm often too lazy and I roll it right away by using a lot of flour on my rolling surface.  Roll it to a 1/4" thick, and cut out the cookies.  You can also glaze it with an egg and sprinkle on some sugar if you want to make it prettier.

Bake it until the underside is turning golden brown (about 10 min).  If you prefer a firmer cookie, then allow it to sit out overnight.  They are lovely dunked into a nice hot drink. 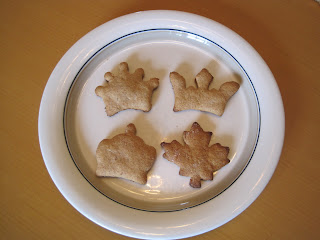