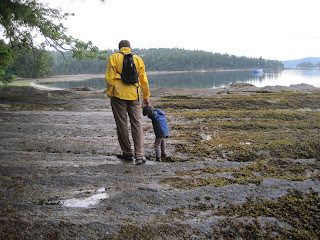 For our second camping trip of the year we decided to head out to Galiano Island and Montague Bay Provincial Park.  Our main reason for choosing the campground was its advertised "family-friendliness".  And it certainly fit the bill! We enjoyed the floating interpretive centre, the 3 different beaches, tons of hikes and tons of other kids.  The interpretive centre was run by a very knowledgeable and keen-on-kids Naturalist. We joined in on an intertidal exploration session, and she was great at accommodating Nikolai in with all the older kids.  She also let Nikolai "help" her empty the touch-tank of creatures at closing time of the nature centre.

So, we are definitely considering camping there again next year!

Now the only difficulty with cycle camping and Nikolai is around the food.  At issue is the fact that my follow-up visit with the allergist basically resulted in the sulfite and sucrose-free diet becoming a permanent fixture in our life.  The only consolation that I have is that the discharge letter exclaims over how pleasant it was to work with us... and gives us another few months of dietary consultation via email.  At least the weight of the letter will ensure that all schools/camps/etc. will take his diet seriously.

Now... what should I do for easy, camping-friendly, light-weight foods?  After pursuing the instant noodles/rice/potato packages that would have previously been our fall back, I realized that most of them were labeled as containing sulfites... which probably means that even those that aren't labeled with sulfites are likely sulfite offenders.  (I'm not sure about the legalities in the USA and Ireland, but in Canada foods are only required to label sulfites if it contains more than 10 ppm).  Sulfites are even considered a natural and organic preservative since they are naturally found in grapes (wine), cabbage (sauerkraut), vinegars, and mushrooms.

So I decided to create my own "instant camp food" recipes.  If I was uber-prepared I could have dehydrated some veg for my meals, but as it was... I cooked with fresh vegetables that we picked up en route.

At camp I added 2 cups of water to my ziploc bag and soaked the lentils and pasta for a few hours to make them quicker to cook.  Then I sauteed up some veg (onions, carrots and peppers).  When they were soft, I dumped in the contents of the ziploc bag and cooked everything together for about 15 minutes. We salted to taste and really enjoyed the results.

Unfortunately, I forgot to take a picture... but it was really, really good.

Again I filled the ziploc bag with 2 cups of water and soaked for a few hours. I then boiled it up for about 15 minutes.  We added 1/2 a lemon worth of juice, 2 tbsp of olive oil and fresh vegetables (tomatoes, cucumber). 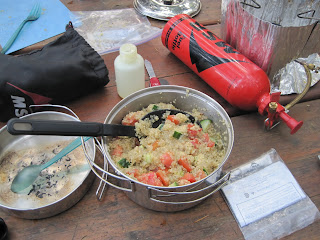 I'm also inspired to make a red lentil-based burrito filling, so maybe I'll try that on our next trip out!

The picture above is Brad and Nikolai exploring the intertidal zone.  The "Shell Beach" has really interesting rock formations and mud flats that make it an amazing place to explore the intertidal ecosystem.

Below is a picture of our "sweet-ride" with Nikolai napping through most of our journey.  And the second picture is Nikolai's "Pirate face". The white sand beach behind him is actually a midden from a traditional First Nations fishing village. The beach is actually white from all the cast-aside shells having been tumbled into the beach. 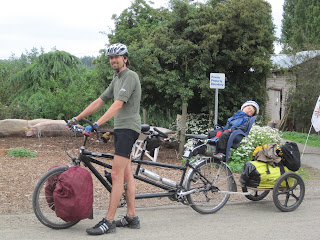 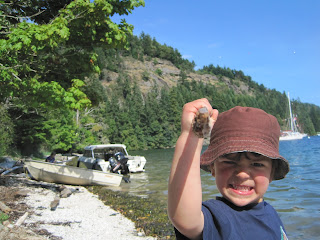 Hi,
my name is Simona and I am with the web research team at InterNations.org. We are the world’s leading social network for expatriates, with currently 500.000+ members in more than 322 cities worldwide.
I really enjoyed reading your fantastic blog and believe that expats in Ireland and around the world would not only - appreciate the entertaining content, but also benefit from the insights and perspectives you offer. Your blog really is a captivating read! This is why I would like to feature you and your writing in a designated section of InterNations.org , the Recommended Blog on Ireland. We have designed a link badge for placement on your blog and would be glad to hear from you directly via our questionnaire!
I hope my proposal has piqued your interest. If so, please feel free to contact me via email: featuredblogs@internations.org