Taking Nikolai to the forest

Forests in Ireland are mainly comprised of deciduous trees and shrubs.  They are generally made of smaller trees and are quite bright.  So it is no wonder that Nikolai mistakenly considers every patch of shrubby in a well groomed park to be the local "forests".  This past weekend we decided to remedy the situation by cycling out to Goldstream Provincial Park for a night of camping in the woods.

We were accompanied by our friends Dylan and Nancy.  And it was a great trip of not-so-adventurous camping!  The only snaggle was in trying to light the overly wet firewood that the park had provided for us to cook our veggie dogs. But luckily the next campsite over had some well-packed car camping folks who came to our rescue with some fire starters, so our second round of veggie dogs were roasted on the end of the stick.  It was so motivating an experience that Nikolai nearly ate his whole second hotdog simply because he'd cooked it himself over an open fire.

Now for a few pictures, but again my camera doesn't do justice to the magnificence of the over-towering giant trees, nor the lushness of the rain forest river.  The cliff side was seeping water, with drips forming on the tips of the ferns and the moss ladened branches and roots.  But here is my best attempt at sharing our very West Coast Wilderness.

A playground along the side of the Galloping Goose Regional trail (it took us nearly the whole way to the park). 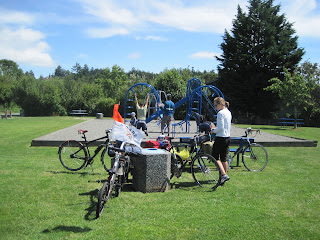 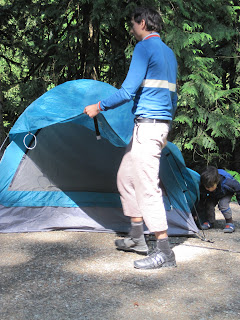 Hugging a rather large tree (we saw larger ones, but this one was conveniently located next to our campsite. 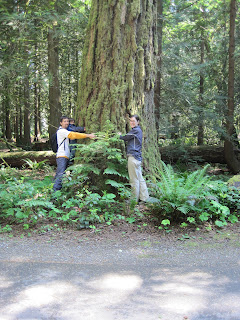 And lastly a picture of Goldstream taken from beside the waterfall.  It was so sunny that all our pictures of the waterfall got bleached out... but you can see the lushness of the rainforest in this photo. 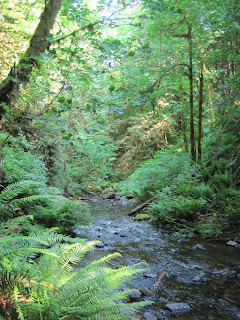