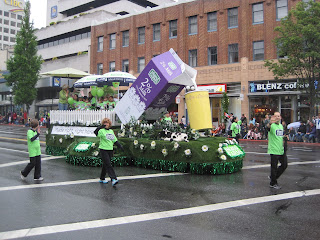 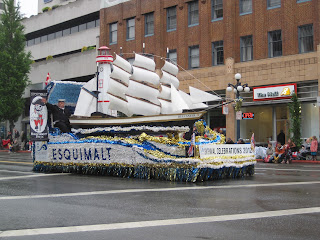 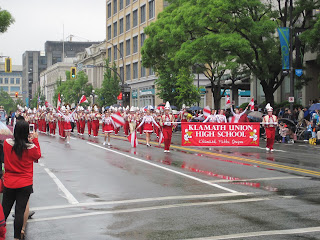 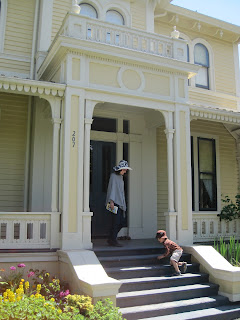 A cycle ride in tweed

One of the things I love about living in a small, yet still important, city is that there is just so much going on.  On any given weekend there are tons of events to go to, yet the city is small enough that I'm always certain to run into an acquaintence or two.  As I'm still rather new to the neighbourhood, I really only have a nodding acquaintence with most of my neighbours, but I'm sure my circle will expand and I will find myself well-connected once again. 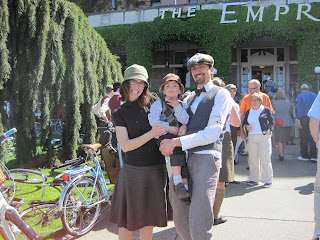 This past weekend we joined the Victoria Tweed Ride.  It was a fundraising ride for Bicycles for Humanity, which sends donated bicycles (typically used bicycles) to African communities.  But mostly the ride was a chance to dress up and show off your bicycle.  Tweed rides started in London (where else?) but have spread around the globe.  If you're interested in videos of people cycling along in a rather dashing attire, then have a look at some of the videos on the Tweed Ride home page.

We only really heard about the Tweed ride two days before the event, but luckily our wedding reception last year was pretty tweedy so it wasn't hard to get into costume.  Though my outfit was not the most spectacular, the skirt was something I made in Ireland, from Irish tweed suiting material, so I figured that I would fit in just fine. 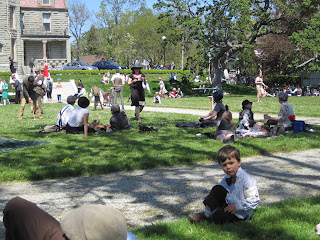 The ride was 16km long, starting at the venerable Empress Hotel.  We'd just bought Nikolai a second-hand trail-a-bike, so it was his first really outing on it.  He did get tired, and complained of a sore bum, but I don't think it was the distance so much as the speed.  It took us forever to finally reach the location of the tea party at Craigdarroch Castle.  In the end, a jolly good time was had by all. 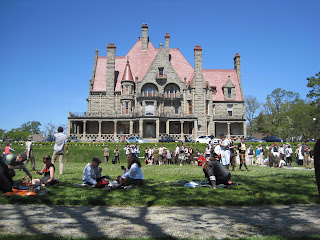 Posted by Emillie at 3:53 PM No comments: 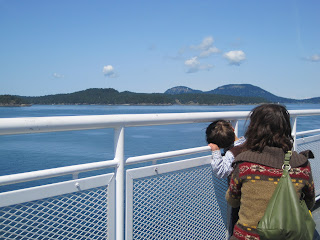 Above is a picture of Nikolai looking for orca's on the ferry ride to Vancouver.  We were on our way to my Mom's birthday celebrations.  It was one of those big round numbers that are generally acknowledged as milestones through life (though I suspect Hallmark at being responsible for the emerging importance of so many "important" holidays).

As usual, I was responsible for the cake.  But if anyone knows my family well... then they know that we are ripe with fun food peccadilloes.  Having a food intolerance is practically a right of passage into the family, so everyone is taking Nikolai's new sulfite-free diet in stride.  My mother is wheat-free, as it seems to flare up her arthritis. And my sister, Claire, was visiting from London, with her dairy and corn intolerance.  So I needed to make a wheat-free, dairy free, sugar free (along with any other processed foods) cake!

As it turns out, I was just as pleased as punch with the results.  The cake was so good that I'd recommend it as a "healthy" alternative for anyone craving a protein fix with their chocolate/peanut butter fix. 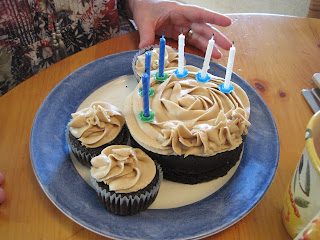 Puree quinoa/butter mixture with 4 large eggs, 1 tsp vanilla, and 1 cup of honey (or you could replace the honey with 1/3 cup of milk and 1 1/2 cups of sugar for a cheaper alternative).

Mix dry and wet ingredients. Pour into prepared pans and bake for 40-45 min or until a skewer comes out clean.  Cool completely in the pan.

Mix 1 cup of creamy peanut butter and 2 to 3 cups of icing sugar or powdered fructose (depending on consistency of peanut butter) until smooth.

I've never been terribly good at applying frosting, so I got some advice at a kitchen store.  All I needed for this cake was an icing bag and a big cupcake frosting tip.  A totally worthwhile investment given my years of cake frosting failures. 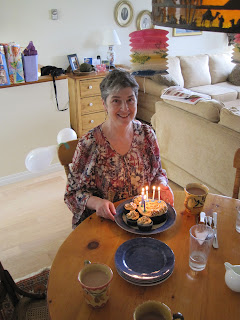 In the haze of a sulfite spray 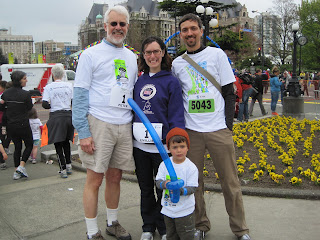 Nikolai's flushing had already started by 3 months when everyone was continuously telling me that he must be sick with a fever... he was always that flushed.  By the time he was a year old I was used to the fluctuating cycles of rosy cheeks, sore bum and hyperactivity.  I generally assumed that he just suffered from serious teething symptoms.  That was, until he got his last set of teeth just after his second birthday.  At that point in time the rash on his cheeks and bottom were so severe that a trip to the doctor was in order.

Given that the doctor was in Ireland, and the Irish health care system is mainly based on prescriptions, Nikolai was declared to have a yeast infection.  We were given an anti-yeast cream along with a backup prescription for an antibiotic/steroid cream (I ripped up the spare prescription immediately, I was not going to be smearing his cheeks and his nether region in steroids without some sort of certainty about the cause of his skin rash).

After a summer of no-sugar, yeast, white grains, etc. Nikolai was pretty clear.  In September we went back to our usual healthy diet and his skin issues came back!  Another trip to the doctor resulted in another diagnosis of a yeast infection and another dose of cream.  Even the doctor was starting to express doubts about the background of Nikolai's yeast problems, and she suggested that perhaps he should be tested for diabetes.  Seriously... diabetes... which if you'd met Nikolai then you'd realise that it's quite unlikely that my very perky and energetic kid has type 1 diabetes.

After some googling I decided that maybe his problem was a sucrose allergy, as it is linked to chronic yeast infections.  Going off sucrose worked great.  His skin was pretty clear, and we (mostly) stayed off sugar... until about two months ago.

After returning to Canada we caught up on all our developmental checks, and it was during a check up with a community health nurse that I mentioned the sucrose free diet.  She basically laughed off my hypothesis. She said that his symptoms sounded more like a regular allergy than a problem with digesting sugar, and recommended that we see an allergist.  I was happy to have Nikolai back on sucrose so we gave up on the diet, which resulted in his symptoms flaring up again... and our Doctor in Canada sent us along to an allergist.

Phew, this is quite the story, but I'm almost done...

The allergist looked at Nikolai's diet diary and skin... and suggested that he might have a sulfite problem.  According to the allergist (and I'm inclined to agree) testing for food allergies with blood, scratching, saliva, etc is quite unreliable.  Dietary testing is the only way to go, so we are spending the next 2 weeks sulfite free!  Oddly enough, the sulfite diet is pretty similar to the anti-yeast diet... nothing white (the bleach contains sulfites)... nothing pre-packaged (nearly everything contains sulfites, even if it's organic, and it's not generally on the ingredient label)...  no dried fruits or pre-shelled nuts... no bulk foods (mostly all sprayed with sulfites).  I'm only into day 3 of making everything from scratch, and it's been a struggle.  None of my usual flavour enhancers are available... no soy sauce or boullion, and I don't get any short cuts... not even canned tomatoes are allowed, let alone any crackers or other easy kid foods.  And absolutely NO EATING OUT!  Sigh, it's like a blast to the 1800's.  I'm busy making up homemade vegetable stock and peeling those tomatoes by hand...

The scary part is... that Brad and I fear that this could actually be the cause of Nikolai's flushing and bum issues.  The no sugar diet seemed to mostly work... but that greatly reduced the amount of processed foods available for Nikolai to eat.  Staying off sucrose is eerily similar to avoiding sulfites.  So I may be a slave to the 1800's kitchen for a while.  Sighs.

The pictures are from the Times Colonist 10 km run that happened last weekend (the start/finish was about 3 blocks from our house).  Brad's company sponsored everyone to run, so he had joined the running crew at work to practice for the 10 km (it only took him 53min, so not too shabby).  Nikolai did the 1.5 km kids run in 15 minutes!  And he was probably one of the youngest kids to run the race without any assistance.  I don't have a picture of Brad crossing the finish line... but it wasn't for lack of effort.  The place was a zoo! 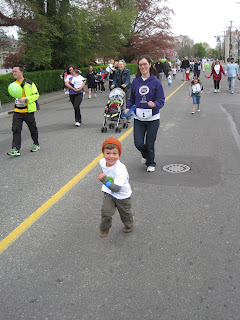 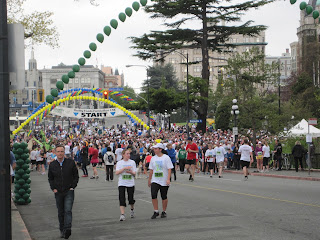