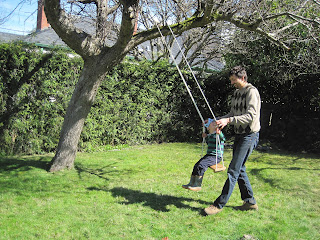 We have been very busy playing around in our large backyard.  When it became apparent that spring was around the corner, we eagerly started digging in the vegetable patch. It took us two weeks of back breaking labour to dig up all the grass and haul it away.  Luckily we have a friend with a tiller, so actually turning in the soil only required us to prepare a rather delicious lunch!

So far we've planted out lettuces, peas and radish.  But Brad has been planning ahead and we have loads of tomatoes and herbs sprouting indoors. 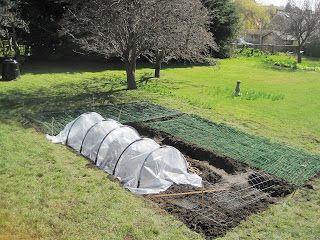 Anyways, today's blog is actually about the swing... and it is my first How To Make It blog.  This was mainly driven by the surprising lack of good information on the Internet about how to make a swing.  Now I know that a swing is a pretty straight forward affair, but the advice we found on the web regarding how to tie the knots was just... well... useless at best... and down right negligent at worst!  So here is how we designed our swing.

Wooden swing base
Brad created the base out of a piece of 1"x 6" cedar.  Then he added the little bottom runners to add some style (we saw them in other designs, but we don't think that they serve a purpose).  To water seal the swing, we painted it with 3 layers of outdoor varnish. 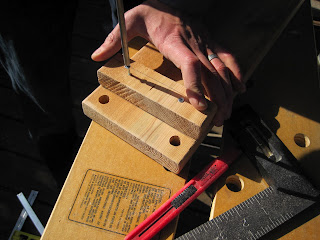 Hanging from a tree branch
When choosing a rope, it is important to consider the fact that it will be exposed to the elements, so it's a good idea to get something with UV protection.  Naturally it's also important to choose a good strong tree branch from which to hang your swing.  It's equally important to tie the swing to the branch in a manner that won't choke off the growth of the branch.  We did this by using a sliding knot.
1. We tied a bowline knot on one end of the rope.
2. We then looped the rope around the tree and threaded the unknotted end through the eyelet of the bowline to form a running bowline.
3. We then repeated the process with a second rope so that the swing would be hung between the two ropes.

A good animation of the running bowline can be viewed here. 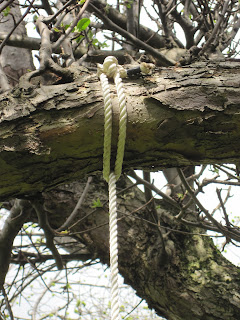 Attaching the swing base
As former climbers, the figure 8 climbing knot seemed like a logical choice for attaching the swing base.  It is a static knot that would allow us to easily make adjustments as we worked at getting the swing to be level.  To ensure that the swing would be stable enough for our three year old, we went with a total of four anchor points.
1. We tied a figure 8 on the line that came down from the tree branch.
2. We tied a simple overhand knot as it went into the base.
3. We then tied a corresponding knot as the rope came back up through the base.
4. Then we finished the attachment by following back through the figure 8 knot.

An animation of the figure 8 knot can be viewed here. 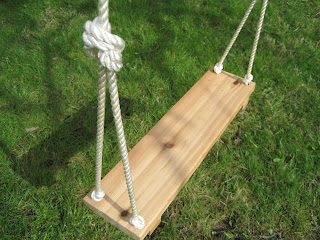 Now all that is needed is a sunny day and a three year old boy! 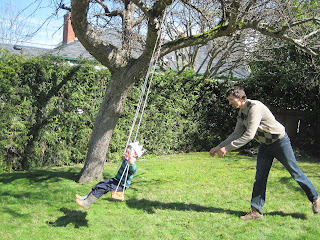 And for anyone still wondering whether we've received our shipment from Ireland... we haven't.  But it did arrive in Vancouver today!  Now it's only one ferry ride away!  Given the current rate of travel, I expect to be unpacking my running shoes sometime in May.  My friend, Steffi, used the same shipping company on her recent move to Australia.  You can find out what she thinks about the quality of service here!
Posted by Emillie at 8:05 PM