To blog or not to blog 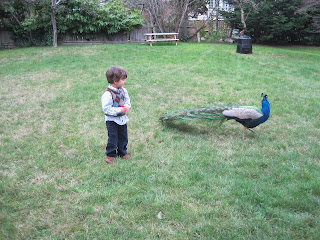 The truth is... I'm having trouble blogging.  This is likely because I am spending a lot of my creative brain power on editing the book (which proves to be much harder than writing it was in the first place).  Also, all my usual blog topics are dried up...
... I'm no longer an ex-pat doing those funny ex-pat things
... I'm no longer visiting tourist sights (there are far fewer sights to see in Victoria)
... I am completely out of the news loop because the radio segments seem to be far too explicit and graphic to have on in the background, as Nikolai is sure to repeat the information wondering about the drama of so much death. (The Irish news stations cover much less world news, so it's mostly about Euro affairs with only a brief coverage of world drama. Whereas, Canadian stations tend to punctuate the news stories with the sounds of gunfire and people crying.  Should I wonder at the fact that he's suddenly of fascinated by guns?  Since he still is afraid of watching Pingu, I'm hoping that a viewing of Bambi will cure him of his interest.)

I guess I could turn this into a blog of our mundane life... but I am not so inclined.  Interesting stories are fun to tell and fun to read, but does anyone really want to read a whole blog about Nikolai's new preschool? (I switched him because he didn't seem to be enjoying the previous one, but now I have to walk 25 minutes to drop him off... and 25 minutes back home again. So I signed him up for 5 1/2 hour days to make up for the long commute.  I ABSOLUTELY CAN'T WAIT UNTIL MY BIKE FINALLY SHOWS UP!!!) The picture above is of a peacock that wandered into our backyard from Beacon Hill Park. Nikolai fed the peacock, and found him to be easily trained to follow a trail of bread crumbs all over the garden. ---Ahem---

So I've decided to move into a blog that interests me... a food blog!  This basically allows me to clear out my folder of recipes into an easily searchable database (thanks to the google search bar and my recipe index).  However, if my readership plummets due to the lack of material then I will probably bid my blog adieu, as it has become a bit of a task master.

Today's recipe is Pot Pie. In a fit of nostalgia for Simple Simon's Pie Man I made a traditional pie for dinner this week, and found it to be quite quick and easy to do!

Dough:
Mix a pinch of salt and 1/2 cup of butter (or alternative) into 2 cups of flour (I used wholegrain spelt) until it resembles a coarse meal.  Then add just enough cold water to turn it into a workable dough.  I used about 1/2 cup. Refrigerate until you are ready roll it out.

Filling:
Basically any stew will do, but here's my generic recipe. Mix all the ingredients together then turn into the pie for baking.  As a veggie recipe, the ingredients don't require pre-cooking as long as you dice everything up finely.
-1 onion diced
-1 potato diced
-1/2 cup of dried red lentils cooked until soft
-1 tsp of oregano
-2 tsp of bullion powder
-1/2 cup of grated cheese
-Salt to taste

Variations include adding different vegetables, using curry powder instead of the oregano, making a white sauce for the base rather than using cooked lentils, or if you're short on time you could eliminate the lentils and allow the potatoes to form the base.

Form the pastry either in a pie plate, or the half moon shape of a pasty.  Fill and seal off. Make a few incisions on the top to allow steam to escape. Bake at 400 C (200 F) for 30min, or until the filling is bubbling and the pastry is browned. 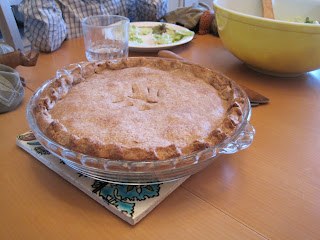