It's tourist season in Victoria... which always results in a mixed feeling.  It's sort of annoying to discover that there's now a line up in your favourite coffee shop, and that all of a sudden you need reservations to eat out at your favourite places. However, it's the pedestrian traffic that sort of gets to me.  It's just best to avoid cycling through downtown because traffic lights and cross walks no longer have meaning when the throngs of tourists are great enough to take over the road regardless of the rules.

However, there are many benefits to living in a tourist centre... loads of good restaurants, museums and well maintained parks are just a few. My favourite part about about the onset of tourist season is that it is also the start of festivals and events season!  And living in downtown Victoria means that most of these events are just a short walk away.

Victoria is so crazy for these special events that there is a whole magazine, 32 pages long, detailing every single event taking place in the downtown Victoria area... and unlike most tourist 'zines, it doesn't have any advertising and very few pictures.  Yes, Victoria is that insanely busy with events.  When we first moved here I always felt the pull to be off doing everything that was on offer.  Now as a seasoned Victorite, I know enough to relax and pick my favourites.

For example, last weekend we had our choice of: a Vintage Scooter Rally, Uno Fest, Cheese & Meat Festival, The Highland Games and Celtic Festival.  None of which we attended. However we did attend the Victoria Day Parade, and the Kite Festival! 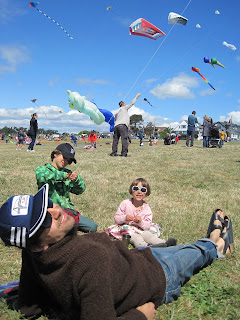 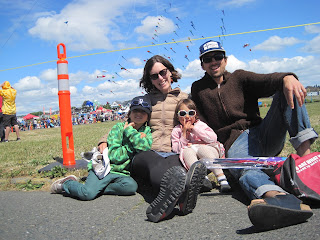 This weekend we had our choice of: the Selkirk Waterfront Festival, Swiftsure International Yacht Race, and we decided to attend la Festival de la Francophonie.  And I'm please to say that Nikolai's French education is clearly working as he had very little problems conversing with everyone at the festival in French! We had fun playing Pétanque. 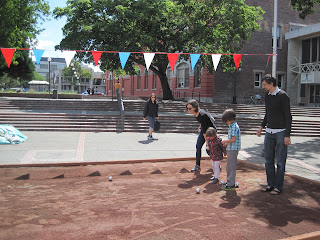 And watching the balloon animal artist. 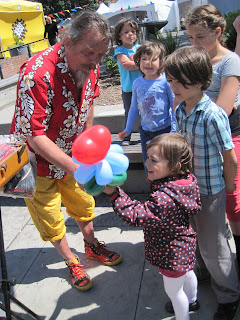 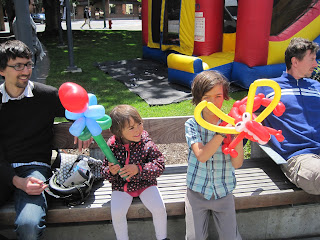 So if you're planning a visit to our lovely spare room this summer, be sure to check out the city guide to find out what events will be on while you're here!
Posted by Emillie at 1:41 AM No comments:

How Does Your Garden Grow?

I realize that it's been a ridiculously long time since I last blogged. And that is because I have taken on two new roles at LifeCycles!

The first is a pilot project on building food literacy within the Capital Regional District (fermentation classes anyone?) I'm actually not teaching any food skills courses.  I'm doing all the data gathering in the form of a survey, focus groups, etc. and I get to write it all up in a nice report at the end!  Ah... a flashback to my years spent in research.

The second role is actually the one that is sucking all my time at this point (to the detriment of my other role in LifeCycles and basically everything else I do with my time). I am now coordinating the Growing Schools Program (elementary school teaching gardens) and it is the height of gardening season.  I'm running day-long workshops at 3 different elementary schools a week. I'm coordinating with volunteers to staff all those workshops. I'm coordinating with schools to have the classes and gardens ready for the workshops. It's not difficult... just time consuming.

Anyways, it's Mother's Day weekend, and our home-based chores are all done so I finally have time to blog!

Please Note: our garden looks great, we've painted tons of rooms, made a new patio table, put French doors into our downstairs bathroom, it's never a dull moment around here! If you're wondering what our two ruffians are up to while we're busily ignoring them... now that Uliana is old enough, we simply toss them out into the backyard and hose them down when they come in covered in mud.

Apparently, they spend so much time out there that they felt the need to create their own shelter. 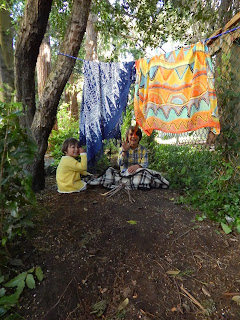 Here's some more pictures from this weekend. The first is a picture of the new patio table (with matching bench). It's painted "Old blue pickup truck " and "Bitter Chocolate".  (I think I want to be the person who names paint colours!) 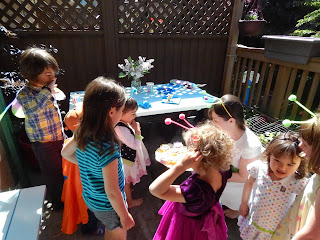 Actually that's also a picture of Uliana's butterfly themed tea party.  Everyone did start out with wings and antennae, but as the playing progressed pretty much everyone went back to being little persons... except for Uliana.  She was a devoted butterfly. 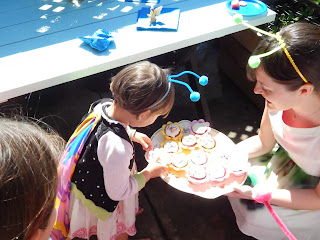 In addition to Mothers' Day, we also celebrated Grammy's Birthday this weekend at one of Victoria's many ocean front pubs. I love Victoria! 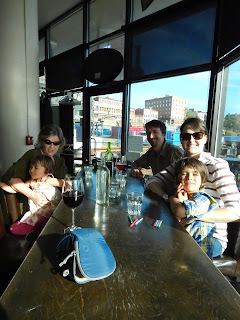 As for my novel... I'm so lucky to have joined a critique group with 4 other published writers. When all the gardening is finished, I will turn my brain to the task of editing up the next draft based on their comments.  In the meantime I'm working on my elevator pitch. I'm hoping to have a few lines to test out by next weekend.  It's hard to distill 90,000 words into just 10. I don't know whether my book is:
-"A feminist take on a traditional Irish fairy tale."
-"A psychological fiction exploring the impact of childhood trauma on the ability to cope with stress as an adult."
-"An offbeat romance set in rural Ireland."
or
-"The journey of a woman who wakes up in a stranger's house and discovers that she has also lost her ability to communicate."

Hum... which one would you read?