It's been while since I've posted a recipe on this blog... as I've been busy concocting recipes to post on my Fermenting for Foodies blog!

However, fall is here, and I found a new way to eat seasonal vegetables that we all love. We all love this recipe so much that I was compelled to archive it, even though it doesn't have a fermented angle to it (which is really saying something). Though I do admit the photo isn't much to look at... it is tasty!  In a good hearty warming sort of way. 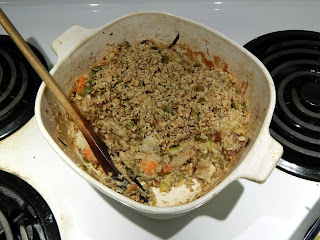 1. Dice up 8 cups of firm winter vegetables.  I have used a mix of root vegetables, squash, brussel sprouts, basically anything you could see yourself roasting up for dinner. Also chop up 1 leek. Toss them all in a large casserole dish with 2 tbsp of olive oil, so that they are well coated in oil. Pop them into a 400F (200C) oven for 40 minutes. Toss half way through to ensure even cooking.

2. In the meantime, make up 2 cups of white sauce that is seasoned with 2 cloves of garlic, 1 tbsp Dijon mustard and 1 tsp of dried thyme.  I have done this with vegan milk, gluten free flour, whatever you want.  If you don't have a basic white sauce recipe, here's mine: 2 tbsp butter with 1/3 cup of chickpea flour. Add in the seasonings, followed by 2 cups of milk. Whisk over low heat until thickened.

3. Mix up the crumble topping in a bowl by combining: 1 cup quick oats, 2 tbsp nutritional yeast, 1/2 cup chopped walnuts, 1/2 cup mixed pumpkin seeds and sunflower seeds. Combine into a crumb topping by rubbing in 2 tbsp of butter until evenly combined.

4. To assemble, season your white sauce heavily as it will provide the seasoning for the whole dish (I recommend 1 tsp of salt).  Then pour the white sauce over the roasted vegetables, then top with the crumble topping.  Bake at 350F for 20 minutes until the sauce is bubbling and the crumble is browing.

Here's some pics of the kids messing around together. 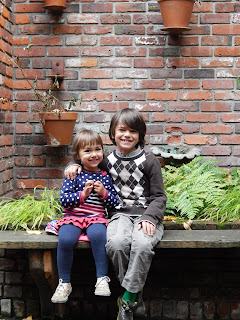 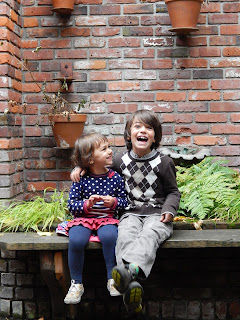 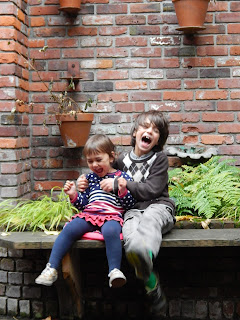 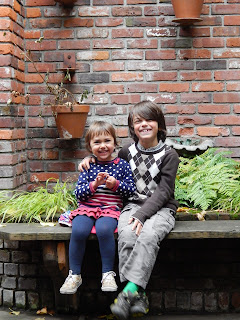 Posted by Emillie at 3:24 AM No comments:

All the leaves are brown

So it's been a month since my last post (I did say that October was going to be busy!  November should ease up a little for us.)

In the mean time, we had a productive month of costume making.  To start this blog off... here is a picture of everyone working on Nikolai's costume. 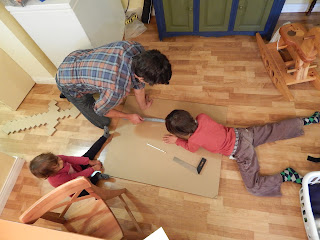 And here's a picture of Uliana on her way home from preschool. I don't think she's practicing face painting for Halloween as much as she's just not limited to paper in terms of her creativity.  I'm glad it's easy to wash off as she comes home painted at least once a week. 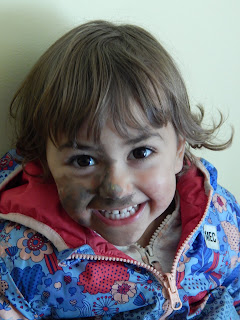 And here's our final costumes!  Brad and I are dressed as "Victorians".  (Nikolai got a joke book, and he's been reading them aloud to us, over and over and over, so puns come naturally at the moment). Nikolai is a Minecraft skeleton and Uliana is a bunny! 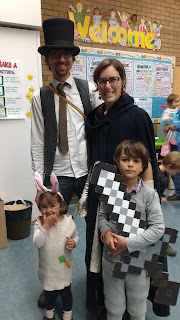 Here's Uliana and her best friend heading out for Trick or Treats (the big kids were running ahead, and wouldn't stop for a photo.) 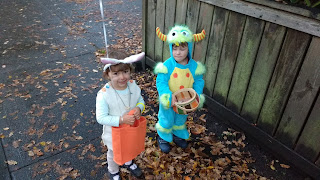 And Nikolai with his mask on (he's not likely going to want a mask again... it wasn't that much fun to wear). 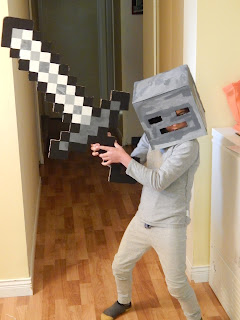 Pumpkin carving in our bohemian household. 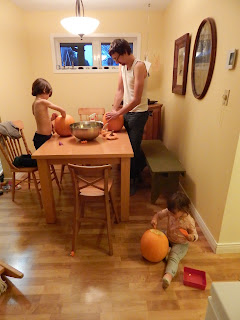 Posted by Emillie at 4:57 AM No comments: