We're on our way.

We are not just cycling gardeners... we are also cycling campers!  We do a bike-camping trip nearly every summer.  Last year the trip was car-assisted (thanks Claire!).  This year Uliana is a big girl.  No more diapers, and no more travel cot. So we decided it was possible to do a bike trip without the car-carrying capacity.

Furthermore, for this trip, Nikolai was ready to do much of the cycling on his own!  (He managed the flat Lockside trail... but struggled with the hills on the small Island).

This trip was also notable because we did something we'd never done before... we went to the American Gulf Islands.  We also went with friends... who had their own set of mighty-cycling children (a 5 year old who did well on her tiny pink bike, and a 7 year old who managed to do ALL the cycling himself!)

Yes, it was a passport-toting, boarder-hoping, child-riding extravaganza!  Though the kids might have not noticed a difference... there were a few fairly obvious differences between the San Juan Islands and the Canadian Gulf Islands.

1. The ferries were way more relaxed.  Even crossing the boarder was easy.  There were few rules, everyone was super friendly, and you could show up just a few minutes in advance for the free-inter-island ferries!  Clearly they view their ferries as a resource for connecting the small Islands into a single community.

Below is a picture of the loaded tandem with Nikolai's red bike, and the two boys, wind surfing on the ferry. 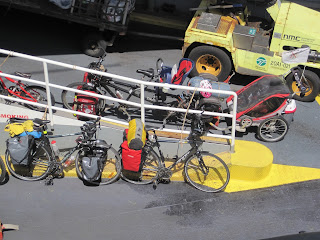 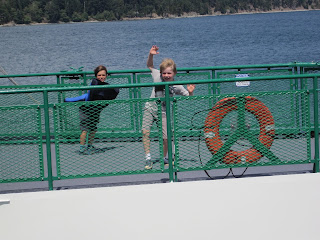 2. The campground also felt different.  It wasn't the all-night-drinking-fest that often happens in BC Provincial campground.  There weren't rules posted everywhere telling everyone what to do when using the toilet, washing their dishes, etc. etc., yet everyone was really respectful.  Also, the forest felt more wild, as all the underbrush hadn't been cleared away.

The best thing about camping was that Uliana LOVED it.  She slept better than at home (through the night and till 7 in the morning!)  And maybe it was the influence of extra adults... but she had way fewer complaints (which is a good thing because she's got the voice of an opera singer and the campground was otherwise quite quiet). 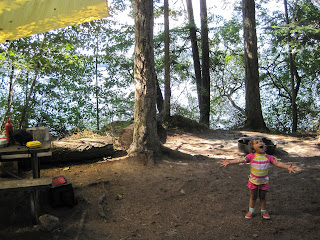 We had a day of rain... which is never fun when camping, but considering the current drought and wildfire situation we didn't complain too much.  Luckily we were able to hide out for most of the rain in a band shelter in the town.

We did get to spend one full day hanging around at the campground.  We buried our friend in the sand to hide her from her mom (the effect was completed by covering her head with a sunhat). 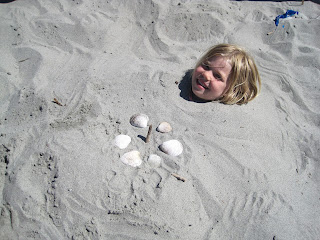 The kids also had fun building fairy houses all over our campsites.  Here's one that Nikolai made (Uliana later ate the salal berries). 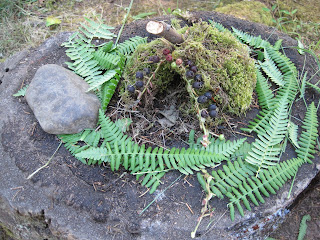 3. The Islands seemed more wealthy than our gulf Islands.  Everything was very picturesque and there were a lot more amenities, given the population sizes. We stayed on Lopez, and only visit San Juan Island on our way out of town... and they were both very well maintained.

Here's Uliana and friends waiting for our ferry in Friday Harbour. 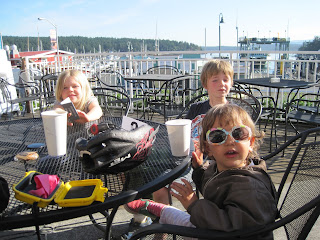 Posted by Emillie at 8:48 PM No comments:

Up in the mountains 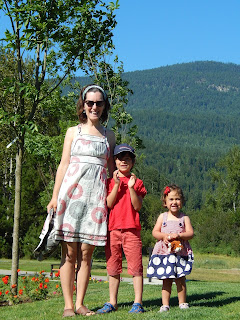 We spent last week visiting Baba in Castlegar.  It was a great trip!  Punctuated by hot, hot weather, thunderstorms and lots of swimming.

We spent several days swimming in the Millennium Pools.  They are a series of three shallow pools (connected by little rivers and water slides between each step down) that draw water from the fridged Columbia River.  The pools get warmer as the water flows from one to the next.  And the well groomed sand was fun for the kids to muck around in.

These ponds were so extraordinary that they would easily make Castlegar a MUST for anyone with young kids.  The setting is beautiful, the beach is well groomed and the water is calm.  Even Uliana (who hates most water parks) became an enthusiastic swimmer. 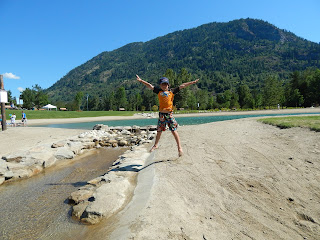 You can see the Columbia in the background of this photo. 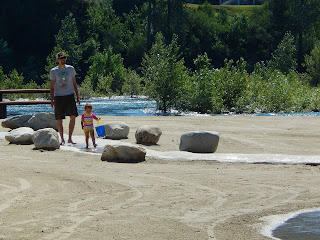 And in the morning the freshly raked sand is smooth enough for a sand angel. 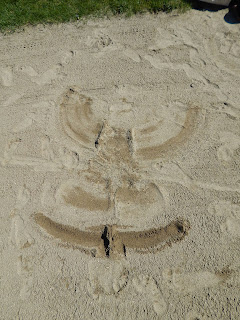 We also bought a slip and slide to use at Baba's house (isn't her view amazing?). 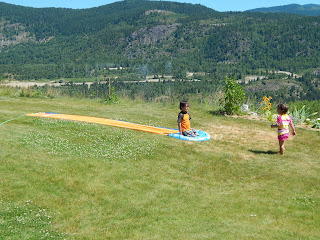 And here's a (rare) family photo from Zuckerberg's Island. 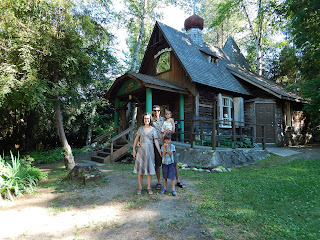 The only tricky part about visiting Castlegar is the travel time!  It's 12 hours total to drive (including ferry).  But surprisingly the kids were amazing in the car!  We did listen to HOURS of children's audio books, but listening to the original versions of Hans Christian Anderson's stories and Chitty-Chitty-Bang-Bang was very academic for us as well.  Apparently there was quite a bit of violence in Children's stories!

(I just included these last two photos because I liked them.) 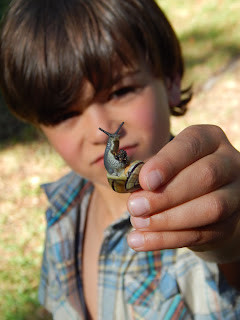 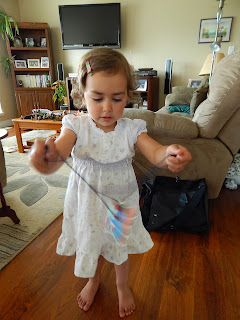