Doctor ain't there nothing I can take? 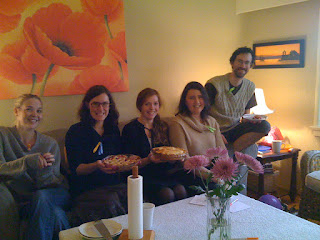 I have been suffering from sciatic pain that started in July. Then in August the pain got so bad that I was having difficulty sleeping because of radiating pain down my legs.  By September I frequently had bouts that were so painful that it felt like my legs were going to give out from underneath me.

Being pregnant means that chronic pain is quite common.  I think pain is even more common for second (and subsequent) pregnancies since your body is happy to fall apart as soon as your hormones start up.  The "fun" part of being pregnant means that all the usual options for pain issues are out.  Forget your T3's, you're not even allowed to take an Ibuprofen.  And the lovely muscle relaxation that would be provided by a hot tub is also out.  Basically my only self care option is to lay on my side with a hot water bottle.

Given that we are car-less and I need to walk a certain distance just to get Nikolai to preschool or buy groceries, spending the day laying on the couch or even sitting in a desk chair is not an option.  Luckily Brad has superb health care.  I have finally tried every available option, and here's a basic rundown:

Midwife: My midwife told me that my problem is because I'm carrying very low.  Basically the baby was head-down and in the birth canal by 28 weeks. (I can attest to this fact as she often knocks at me in the bum or bladder with her hands). Putting aside all the potential risks of a preterm labour, it also means that my pelvis has been fully open for a while.

She gave me a prescription for a sacroiliac support belt.  It is a huge thing that I wear whenever I'm standing up for more than just a minute or two.  And it probably has helped me with the pain more than any other treatment.

Chiropractor: According to the chiropractor my issue is because my left pelvis loosened more then my right pelvis.  Thus my left leg had more pain because it was supporting the weight of my belly.

I wasn't super comfortable with the treatment, which involved laying on a maternity pillow and having my right pelvis cracked.  The chiropractor said that I would need to come in weekly to keep my right pelvis loose.  She wasn't happy about my support belt because "it would just mask my real issue".  I went twice.  The first time was nice because my whole body felt looser afterwards.  The second trip didn't seem to do anything so I decided not to go back.

Massage Therapist: I do love massage therapy.  Unfortunately we never have time to work on my back or shoulders.  According to the therapist my issue is that my sacral muscles are working over time to hold my joints in place. And the nerve that runs through the sacral muscles is the sciatic nerve. Based on the properties of the sciatic nerve, the muscle doesn't just ache like normal muscles, it basically causes the dull radiating pain down my legs, until the muscle finally seizes and then I have the extremely sharp debilitating pain.

This means that my massages are anything but relaxing.  I spend most of my time trying to relax my muscles while suffering from sharp pain.  It does help for around a week afterwards, so I have been going back regularly. Besides, I figure that the painful part of massage therapy is helping me train for labour as I practice relaxing and focusing myself away from the pain.

Osteopathy: As it turns out my family doctor is also an osteopathic doctor.  At the moment I don't think that there is osteopathic training in Canada; however, my doctor is American.  (For anyone who is curious, I think she's here because of a strong belief in universal health care. She is a fab physician.)  Even using the Internet, I was not able to figure out what it meant to be an osteopathic doctor.  However, because she was also my family doctor, my treatments were covered by government health care so I signed up for three treatment sessions.

According to the doctor she was feeling my fascia (connective tissue around my bones) for tension.  She primarily noticed tension in my right hip, and released it with pressure.  Even though it seemed like she wasn't actually doing anything at all the treatment was painful.  She chatted with me the whole time which helped to distract from the pain.

My pain did seem to improve after several treatments.  However, the most noticeable outcome was that I was instantly in a better mood.  I laughed and was happy for the first time in weeks after that first treatment.  I felt so open and free, which only continued to improve with subsequent treatments.  Unfortunately my doctor is REALLY busy, so after my last treatment I was unable to get another appointment until December 24th.  (She really is that good.)

Acupuncture: Once I realized that I was going to have to wait for nearly two months to have another osteopathic treatment, I decided to be brave and try acupuncture. So many of my friends have used it for pregnancy related pain that I knew I would have to try it. (No matter how terrified I was of the procedure, there is some scientific evidence proving it to be quite effective.)

The treatment involved laying perfectly still with a bunch of really thin needles sticking in me.  The needles in my hips went in with very little sensation.  The needle in my forehead stung for a bit. And the needles in my hands and feet went in with a massive explosion of nerve feeling/pain that quickly dissipated.  Even though it initially was disturbing, I quickly got used to it and I was asleep by the end of the treatment.

The acupuncturist described what she was doing using terms like "energy centres".  I was later told by my massage therapist that the needles are likely stimulating the fascia (see above) that run through our body.

I will definitely try acupuncture again. It seemed to help a bit with my leg pain. However, the mood effects are more noticeable.  I had the treatment on Monday, and I have slept soundly every night since then (that's a huge feat with a 35 week pregnant belly).  My mood has improved and I seem to have a ton more energy.  Now, I just have to get over my distaste of the treatment!

The picture is from my baby shower last weekend.  We saved everything from when Nikolai was a baby, so my "gifts" were promissory notes to take Nikolai out for some exercise.
Posted by Emillie at 4:35 AM