Underneath the dust motes

Living on an island makes travel to exotic places difficult.  It requires either a four hour trip to the Vancouver airport, or a multi-flight journey from our small airport.  (Though there are flights to exciting locations, they tend to run on a once a week schedule.)  Either way, travel to anywhere that isn't just a campground is much more expensive from Victoria than it was from Maynooth.  So this summer we've limited ourselves to one big trip.  And we definitely made the most of our trip to New York for a family reunion.


Picture a cluster of three cottages, all built in the early 1900's, or maybe even the late 1800's.  There is a shared wash house, a barn, and an old hand pump house where we used to get our drinking water (in recent times this has been upgraded with an electric pump).  These cottages were once part of a yearly migration from the town to the lake for the summer.  Though the village of Cambridge is only a few miles away, and would still provide for most provisions.  But summer would be spent at the lake, lost amongst the swimming holes, flower bed, vegetable gardens, and campfires.  This is a world that is shared with the cray fish, frogs, turtles, and ducks.

With my grandparents' recent passing (just a short 2 years apart) there is no one left to make the cottages their summer residence.  So they have remained, trapped in time, full of the memories of my grandparents youth. It is most marked by the calendar that hangs on the wall of one of the cottages as it is forever stuck on September 2008.  It remains as a quiet marker to the illness of age that eventually breathed the life out of my grandfather.

After he got over the museum like quality of the cottages ("what is a record player for?") Nikolai warmly embraced all that he could find to amuse him.  He played on the old zither and the more modern acquisition of a melodica and everything else he could find.  The experience of his explorations touched my uncles and my father as they remembered the original colours of all the toy cars, that had long since lost their paint with age. And the books of their childhood, all there, in the cupboard, to be enjoyed by the next generation. Clearly someone loved the exciting adventures of firemen as much as Nikolai does.

Some items even pre-date my father's childhood, such as the stacking wooden men that are still in good shape, and the heavy irons which have been re-purposed as doorstops.

This trip we went through the contents of my grandparents "town" house, everything was distributed, donated or thrown away.  Only two plastic Tupperware boxes of pictures and paper remain.  We laughed over the old school work, photos and cards. But we sighed over what to do with all of it... the remnants of a life full of children and grand children.  We were all given something to take home that was too important to throw away, even though it would likely serve very little use in our modern lives.  My pregnant belly meant that I was given a whole bunch of knitted baby clothes, most of them are marked with little holes from age.  But I will wash them, repair them and stuff the baby into them at least once... for a photo.  They are too sweet to lay forgotten in the bottom of a box.

Enough with the sentimentalization... here are some photos (with the promise of another NY blog sometime soon)!  Though I have to admit we mostly forgot to carry around our camera... so I truly hope some of my other relatives decide to share!

Here is Nikolai in the doorway of the "middle cottage" where we were staying.  The hat is from my Uncle Roger, and it's to match the red cowboy boots.  I've already managed to convince Nikolai that it would make a great Hallowe'en costume... there by getting out of having to actually sew him a Dragon costume (his other choice). 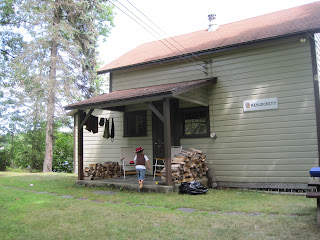 This is a picture of Nikolai and my Dad on the porch of "Stonefax" (my grandparents' cottage). 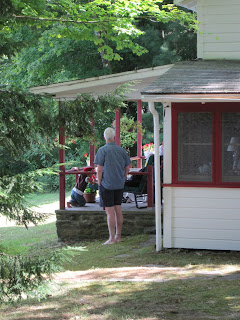 Claire and I floating out in the lake. 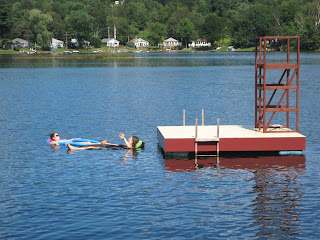 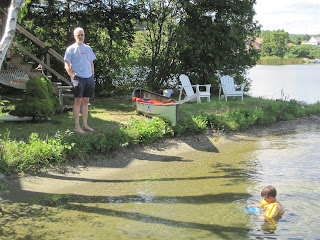