The land of festivals 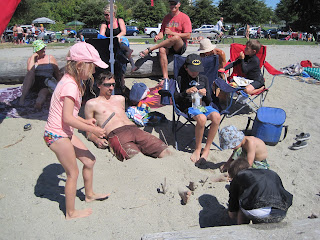 Victoria is truly a city of festivals.  There is something going on every weekend, and because it's really just a small town with a big tourist population, every festival feels like it was made just for our enjoyment.  All these same sorts of festivals happen in many major cities across the world, but Victoria's small population means that you don't have to line up forEVER to get your face painted or a free balloon animal.

I covered our spring festival events earlier this year, but haven't yet touched on our recent festival fun.  Though there's something on every weekend, thus far we've only gone to the free events, and only when we've had the time.  For example, this past weekend was Symphony Splash and apparently we should plan on staying in the city for it next year.  Nikolai's friends have all been raving about the "instrument petting zoo" and my friends loved the music.

However, we have the best possible excuse for missing last weekend's event... Brad's brother threw a giant extended family reunion party for Brad's mother's side of things.  The party included all her siblings, and her cousins... plus their families.  A hearty crew to be sure!  Being pregnant, and having spent my recent summers in "balmy" Ireland, the 30 C heatwave sort of melted me into a pool.  We did spend one day at the beach with all of Brad's siblings and Nikolai's cousins, and the North Pacific kept my feet quite cool. 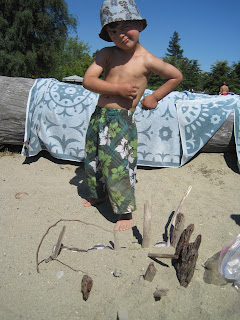 There are quite a few other free festivals worth coming over on the ferry for.  For the slightly more mature than a four-year-old crowd, I would recommend the Moss Street Paint-In.  All the local Victoria artists and a good number of artisans line Moss street with booths displaying their work.  Everything's for sale.  And a lot of the local residents get involved by setting up lemonade stands and garage sales.  The whole event centers on the Moss Street Market, which is always worth a visit.

Nikolai's favorite event was definitely the Buskers Festival.  Never having been to one before, I would have assumed that it was all about people playing guitar or doing magic tricks.  But it was actually more like going to a circus (sans the animals).  The city had a number of stages for large outdoor acts.  Nikolai's favorite act was a pair of acrobatic tumblers from Quebec, who were so good with their tricks that I'm sure they are hoping to move onto a career with the Cirque du Soleil.  Though Nikolai mainly found them funny because the smaller man was constantly being tossed about in a humorous fashion.

The photo above is Brad being buried by the junior members of his family.  And the photos below are of Nikolai at the Victoria 150 years celebration. (Celebrating Victoria's graduation from just being a trading post-style fort to an actual town.)  He was most enamored by the old fashioned firetrucks, and the live performances.  They were also giving away free lunches... but ran out of vegetarian food before we arrived.  (Though in a city like Victoria, one would imagine that everyone would be happy with a vegetarian sandwich!) 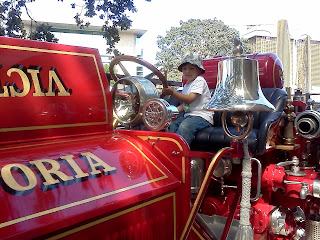 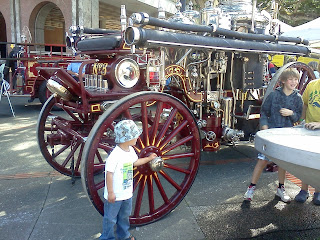