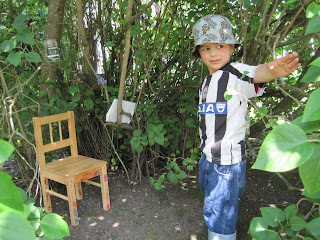 Today's blog is going to be entirely selfish.  And it's because, due to hormonally linked memory acquisition, I didn't remember anything of my pregnancy with Nikolai until I was pregnant again.  So I need to remind myself of my vow on May 20th of this year...

Today's blog is all about morning sickness.  To start off with, I should have expected it.  NOW, I remember being sick while pregnant with Nikolai for around five months.  But without all the extra progesterone and hGC coursing through my veins, the memory was erased, as memories are very tricky creatures subject to the conditions under which they were created.

However, my morning sickness this time around was MUCH worse.  For a full six weeks I was nauseous for my every waking minute.  And my nausea was made worse by anything to do with food.  I had to distract myself from actually thinking about food when grocery shopping, preparing lunch, snacks and dinner.  I couldn't stand the smell of food.  Needless to say we ate a lot of sandwiches and salads.  And I made some pretty awful meals too... Perhaps most famously, is the time I opened the refrigerator, fished out the broccoli and potatoes that Brad had purchased, chopped them up into a casserole dish, sprinkled on some flour, poured milk over the whole thing and hoped like hell that it would cook in the oven.  It did.  But there was absolutely no flavour to it, and I'd made enough to last us for several days.  It is truly unfortunate that Nikolai's allergy testing coincided with my nausea since I was left without any "fast" food options.  So we had a number of such lackluster meals.

And what happened when I had heightened nausea?  Well I was left with two options: lay on the couch and distract myself with a book, or visit the toilet.  Visiting the toilet was brilliant as I felt pretty amazing afterwards.  However, I didn't want to lose much weight or water, so laying on the couch was how I spent most of my life.  Nikolai and I played a lot of cards.  He also found a ratchet set, which he co-opted into a "doctor's kit" and spent a lot of time ratcheting me in an attempt to make me better.

Despite my best efforts, I still managed to vomit up my thyroid meds, my prenatal vitamins, and I even woke up to vomit in the middle of the night with nothing at all in my stomach.  It all peaked when I was around nine weeks pregnant and I ended up so dehydrated that my tongue was swollen, white, and fuzzy.  But it was that HARD to drink water.  I really don't know how I (or Nikolai) made it through those six weeks. Mainly, I think I survived by walking through my day like a zombie.  (So... that is why the blogs from that era are missing, or lacking in any kind of blog-sparkle.)

But the end was in sight.  It was the Saturday morning of our camping trip with Nancy and Dylan.  The first morning I woke up without nausea.  And my nausea free state lasted until lunch!  (The rest of the camping trip was navigated by turning off my brain and ignoring the nausea).  Then the following Wednesday afternoon I felt... fine!  I took Nikolai to the playground for the first time in ages.  And so it went... a few days of solid nausea with a glimpse of freedom arriving every so often.  Slowly the stretches of time between bouts of nausea lengthened, and I was able to have my life back.

For the past few weeks my nausea has steadily continued to decline, though every meal still makes me feel a bit ill... and I am still madly attached to my sea bands (acupressure anti-nausea bands that have been shown to help decrease nausea in pregnancy).  And I am sure that in a few weeks time I will have a day that will dawn like sunshine, and it will be a day without any nausea at all.  So this blog is to remind me of my vow from May 20th... that I will NEVER put myself (and those around me) through this again!

Above is a picture of Nikolai tucked away into his hiding spot in the center of a cluster of trees. He's completely hidden from view on the outside.  Below is a picture of the amazing Black forest cake that Brad made me for my birthday.  He made the entire thing from scratch and it took him quite a while. It's made with a Genoise chocolate cake as a base, chocolate mousse and cherry filling, and whipped cream with chocolate curls on top.  It was truly inspirational, and (while I'm making vows) I vow to make more fancy birthday cakes from scratch! 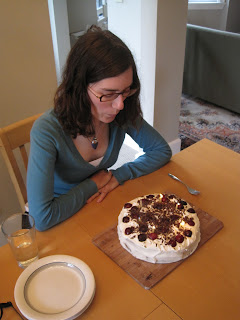 I am glad you are finally starting to feel better...in time it will be a distant memory, and, all will be forgiven the second you hold your new baby :)

Hi Emilie, just managed to look up your blog today, how's that for procrastination! Great news about the new baby, congrats to you all, life looks good in Canada, all well here. Clara still talking about going to Canada next summer, will let you know if that comes off.
All the best to Brad & Nikolai (who is looking as adorable as ever!)