It's a small world after all! 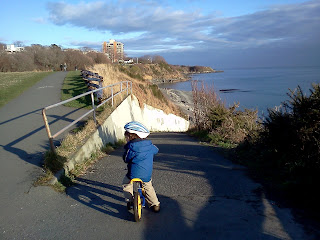 One rainy afternoon a couple weeks ago, we decided to set upon our stack of paperwork.  In Nikolai's case this was directed towards making the required 16 valentine cards that he was to distribute to his preschool classmates.  Though this practice seemed a bit odd to his Irish friends, in Canada Valentine's is not just for couples, but rather a general exchange of cards. (Likely brought about by Hallmark to sell more cards.)  And I decided (mainly because I didn't have the time to go shopping for store-bought cards) that Nikolai should participate in making his cards.  This basically involved cutting out heart shapes from craft paper and decorating them with stickers. A seemingly simple task that became impossible to complete due to the shear number of cards to be done.

On the other side of the kitchen table I tackled our pile of mail. My success was much greater (though perhaps it's not fair to compare my diligence with that of a three year old), and by the time we were done all I had left was a stack of letters to mail.  I had stamped, addressed and readied everything to go, leaving behind just one letter to be addressed.  We were sending postcards to some of our friends in Ireland, and remembering Irish mailing addresses is a pretty simple task... if you know where the person lives then that's all you need!  There are no postal codes or tricky systems to figure out, all you need to know is the street address.

In fact, in a town as small as Maynooth sometimes a name is all that is required to have mail delivered. We've actually had first hand experience with this relative miracle in the modern age of mail when An Post (postal service) automatically started forwarding our mail about a month after we moved to Earl's Court.  I guess there aren't that many Zarikoff's or Parrish's in Maynooth!

Back to Victoria and my stack of postcards and redirected mail... the next day we carried the pile to the mail box and sent them on their way.  It was only after I tipped them in that I realized the unaddressed postcard was in the batch!  It was to Nikolai's old preschool, and though it had been fully decorated for Valentine's it wasn't addressed.  The issue was that I couldn't remember the name (Tiggywinkles or Tiddlywinks). It wasn't that I had forgotten the name, just that I was always getting it wrong, even when Nikolai was attending the school! I thought of hassling our local post office to get the errant postcard back, but it seemed easier to simply make another one.

So this past Monday I had Nikolai sit down with his paints to make a replacement postcard.  (For some reason he was way less interested in painting the postcard than he was in painting the hockey sticks we'd cut out of an old cardboard box.  It certainly hasn't taken him long to adopt some Canadian interests!)  But this week, I have been languishing with a flu so the painted postcard has remained unsent.

Now to the punchline of the story... have you guessed it yet?

Today we found out that the errant postcard arrived safely to Tiggywinkles and Scallywags!  A friend in the class wanted to know just how famous was Nikolai to have the postcard arrive safely.  It had been addressed thusly: Dear Preschool Teachers and Class, (insert a bunch of shiny heart stickers)  From Nikolai.  Maynooth, Kildare, IRELAND.  Personally, I'm pretty amazed.  There are at least four other preschools in town, so it's not like it was an easy task to figure out which one had a former student named Nikolai. Now that is a mailbox miracle! Kudos to the An Post workers (and perhaps the strength of the Maynooth gossip circles)!

The picture is from the beach at the end of Government street, but don't worry, he didn't go racing down that hill! It's taken with my fancy new phone, and I don't think the picture's half bad!
Posted by Emillie at 4:42 AM

Hi Em, I told my sister Mary, the postie you were amazed at the postcard getting delivered and she was chuffed :) Ash x