All these things into position 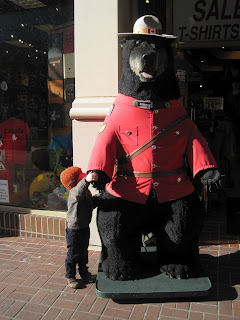 Today I don't know what to blog about. And in the same breath, today is the day I must blog.  Yet my mind comes up blank.  It is coming up blank about nearly everything... what should I cook for dinner... what should I wear... what should we do today... I think my main issue is homesickness.  It really is making it hard to motivate myself in a forward direction towards anything.

Officially "I am back home". Unofficially, Victoria is a city that we lived in for just one year prior to moving to Ireland.  How could I be back home when I lived in Maynooth for nearly double the time?  My connections to Vancouver are plentiful... between all the family and friends we have there we didn't even get enough time to see everyone in the few days before we moved to Victoria.

And here we are back in Victoria.  Don't get me wrong, we have friends in Victoria. But the small splash we briefly made before leaving for just over two years means that we have really very few strong connections.  I know that it will take a few months to find ourselves on the other side of the boredom that comes from loneliness.  In the meantime we must be patient... and relearn the friendship dialogue of Canada.

Certainly Nikolai has suffered the most social disjointedness in this new culture.  Although we weren't sure if he had developed an accent before leaving Maynooth, it took a full 3 weeks before anyone over here could understand what he was saying.  He still sounds odd, but he's adjusted his vowels enough to be understood by the general public.  And the games he plays are all wrong:

-In Ireland, kids are allowed to be rough and tumble. No one is really upset by a younger sibling being accidentally knocked over.  In Canada, children are encouraged to express creativity, as long as they are sitting still while they do it.

-Superheros and trains were cool in Ireland. We've been reading books on dinosaurs non-stop just so Nikolai can catch up.

-No one seems to care about Postman Pat or Fireman Sam or even Peppa the Pig.  And while we still watch Hubble through the RTE portal, I doubt Nikolai will have any friends who share his interest in Ogie and Emma.

My greatest challenge is in figuring out how people communicate with each other, because it's certainly NOT through texting.  It seems like half the people I've met so far don't even have cellphones, and those that do don't seem to engage in the steady flow of conversational texting that I've grown use to.  Clearly I need to get back in the habit of exchanging email addresses rather than phone numbers.

Now to end on a more upbeat mode! (Lest my doting family start to worry about my mental health!) We enjoyed the company of Dylan and Nancy over the past weekend before they left for two weeks in Hawaii.  Although that mainly benefits THEIR mental health, they did leave us with the use of their car for the intervening period. Basically they live a 3 hour drive Up Island and are storing their car at our house. However, we've been putting it to good use picking up used furniture and general supplies. It's a relief to finally have a furnished house!
Posted by Emillie at 5:30 AM