Any tour of the Costa del Sol is mainly about the beaches. We traveled to beaches all up and down the coast from Malaga and Benalmadena to Fuengirola.  They provided the usual beach experiences.  Picture white soft sand dotted with polished shells, a steady row of over priced tapas joints and kiosks flaunting inflatable beach toys, cheap sunglasses and other kitsch.

Our host was entirely of this vein of Spain. An expat Brit who owned a pub nestled in the heartland of pasty-white British sun catchers. His brown and ragged skin bore all the tell tale signs from years of over indulgent tanning. With the easy smile of a practiced host, he provided a knowledgeable expertise to the ways of the Spanish that often fell into a rote memorization of facts that didn't always seem to reflect the reality of our experiences. Perhaps we are less inclined to tut at the wanton ways of a population that still believes in a three hour siesta than his usual pack of tourists.  It's true, that the sweeping application of the siesta closure confused us at first; but we quickly learned to live in the ebb and flow of an afternoon at home.

Since it was December, the weather was not often leading us to a life of margaritas on the beach, and so we managed to explore a number of the surrounding towns.

MALAGA: Large and urban, Malaga is a place for the Spanish to live and work (unlike the other tourist centred coastal cities). We hiked up to the castle and enjoyed the view. Though I probably wouldn't have enjoyed the heat generating hike if it had been summer, as it was, we benefited from the cool day. At the top, Gibralfaro was a cheap enough tour at only €2, however, it wasn't the most impressive castle I've been too.  (Though perhaps I'm jaded after having lived next to a ruin for so long). 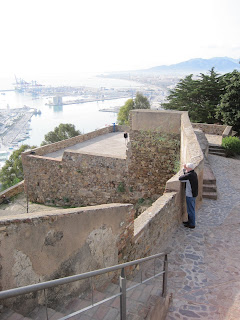 We also went to the Picasso museum, which was quite pricey, and certainly didn't contain his most impressive works.  However, the bottom floor did have an interesting layering of ruins from Pheonician through to the Renaissance.

Malaga is most notable for having nice tapas joints, good shopping piazzas and a great food market, which appeared to be free of tourist pricing! 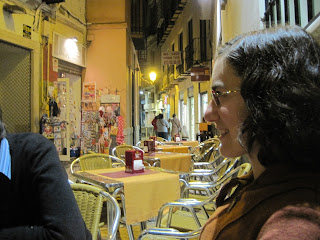 MIJAS: We went to Mijas A LOT.  Basically it's a cute, whitewashed pueblo (village), full of artisan shops (though admittedly interspersed with tourist cr*p).  Viva the off-season touring!  Having seen the huge car park dedicated to tour buses, I can only imagine what it would be like in the summer! 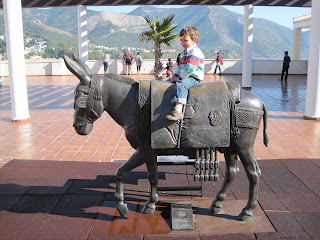 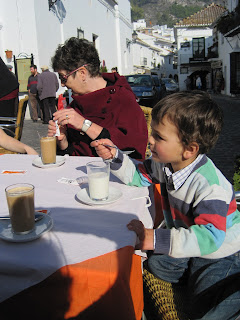 GIBRALTAR: After waiting in the huge line of cars to have our passports checked, we weren't left with much time to tour this imperialistic enclave.  I imagine that it is the ONLY border in the EU that is still passport controlled.  However, ownership of that contentious rock is still a hot topic of debate... and the likely reason for that will soon be revealed... 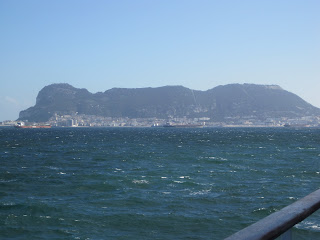 The touristy thing to do would be to take the gondola up to see the old Fort.  Unfortunately we didn't have time for that.  Instead the tourist bureau recommended that we walk up the High Street.  And what an ugh ugly High Street!  It feels like you've stepped into a trashy mall full of stores selling alcohol and jewelry.  My mom had a headache, so our first stop was for a huge bottle of Aspirin... which came to just £1.50?  Then we noticed all the shops were advertising Duty Free... a few queries later and we discovered why the place was like an airport shopping mall, and why Spain might be more than a little PO'ed at the stronghold of Gibraltar.  Well, how would you feel about having an open border with a place where EVERYTHING is tax free? 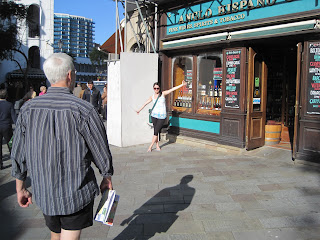 RONDA: This is a lovely little hill top town with a truly gorgeous old town.  Unfortunately, we forgot our camera... as it's a place that is best described with a photo. However, we did have our cellphone camera.  The most notable thing is the massive gorge that divides the town in two, and is best viewed from the two few beautiful bridges that cross it. 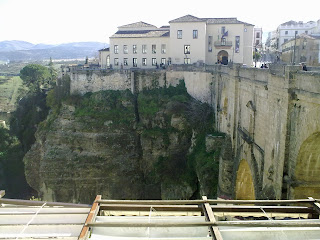 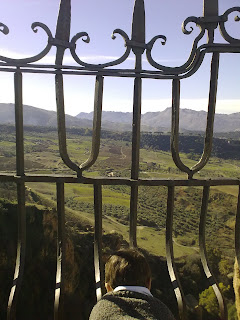 We also went to Granada, but this post is long enough... so that adventure will have to remain for another day.
Posted by Emillie at 2:34 PM