All the small things

However, those were just the lessons I thought I'd learned from living in Ireland. Instead it seems the actual lessons learned are much more profound and social than simply learning how to live without indoor heating.  Anyways, after having spent a few days in Vancouver and Victoria, here is a more accurate list of what I learned while in Ireland. 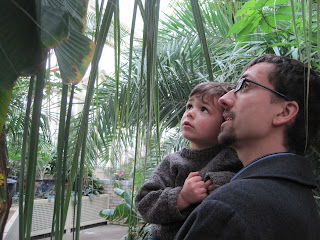 1. My first surprise came while we were getting a bunch of chores done (updating our bank account info, buying cellphones, etc.). I was perplexed to find that the service people were impatient with me. Of course they were friendly and polite, but they were also distinctly impatient with my dithering over decisions. I'm not sure why anyone would be expected to take less than 2 minutes to decide which cellphone plan to choose? Regardless, the service personnel certainly wanted me to "get on with it".

In Ireland, I was always the fast, efficient and organized person. When we first moved there I was the person who was impatiently waiting in line to be served.  So I am surprised to discover that I apparently did learn how to slow down and take my time with things (though I bet my Irish friends are laughing right now, as I never did learn how to be late for an appointment!).

2. After a few days of attending playgroups and taking public transit I realized that Canadians are very friendly, whereas the Irish are good friends.  What I mean by this is hard to define... but I will try to explain myself through a series of examples.

i) We have yet to take a bus ride in British Columbia where someone doesn't try to make small talk with us.  Everyone seems to want to talk about random mundane things, like the guy making my Americano telling me about his juice bar habit (spinach, carrot, spirolina and apple juice on that particular day). This perturbs Nikolai as he's not used to being constantly talked to by strangers. In Ireland, I'd seldom get approached by complete strangers... (though I've heard that this happens a lot to tourists, but it's likely because you're identifiable as a tourist.)

ii) Never in all my time in Ireland has anyone asked me about my plans for more children. Anything even treading close to a subject of a personal nature would not be a topic of conversation, unless it was chosen to be shared with a close friend.  However, at our first playgroup, I was asked about my future children plans, no less than 3 times, by complete strangers. To be honest, I was a bit taken aback by the immediate intimacy of these simple introductory conversations. I learned from one mom that she'd moved from her home in Peru to escape "the family business" and I met a mom who told me all about her divorce. Basically, anyone who talked with me was more than willing to go into the deeper realms of their personal stories almost immediately.

Though these features seem "friendly" they are about as "friendly" as facebook.  You may "like" the fact that I'm wearing pink socks, but it doesn't actually mean that we've had a conversation in the past 10 years. Whereas, when we made a personal connection in Ireland it tended to lead to a reciprocal exchange of kindnesses; dinners, sharing toys, cookbooks, exchanging clothes and endless cups of tea.

3. I also have been surprised by the overwhelming affluence and poverty that both present themselves openly in the Vancouver and Victoria streets. Perhaps the poverty isn't any different from that found in Ireland, but it is a striking thing to see a clearly struggling homeless person sitting outside of a grocery store like Whole Foods (Whole Foods would be like Fallon and Byrne, with a much larger store... and notable mostly because Vancouver would have at least a dozen equally posh grocery stores).

There is just so much to buy here! I am bowed under by choice and the plethora of options. Coupled with this increased amount of choice is an increased amount of advertising. Everything is for sale and your happiness is the currency of trade (though I do not profess to know whether owning a baguette flown in from Paris will ACTUALLY make you happy, or rather leave you feeling just that little bit sad).

I can tell that Nikolai is overwhelmed, and Brad and I are certainly not immune to the consumerism fever.  I think my antidote will be to spend a few weeks hiding in the relatively small community of James Bay.  And god forbid that I dare to venture in the Uptown district that is being heralded on the sides of all the Victoria buses. It somehow stinks just a little bit too much of the "Celtic Tiger" era.

Next week we stop being tourists and finally move into our new home. Phew! Nikolai had upwards of 5 temper tantrums today... so I think he's tired of our transient lifestyle (or perhaps it's another repeat of the roseola incident?). Anyways, it brings into question the future of my blog... though now that I have some Irish followers, I'll have to do some blogging about Victoria, if only to encourage future visitors!  The photos are from a December trip to the National Botanic Gardens in Dublin. 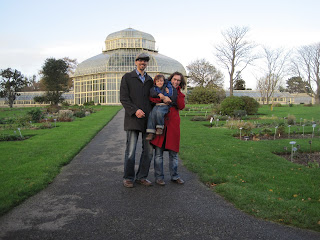 Love your posts. I'm an expat living in Dublin (American) - I hope to espouse equally heartfelt truths about what I've learned living here when I leave. (particularly liked the friends vs. friendly bit)

Living in a foreign country can change us in ways we don't realize or expect, eh? Just remember that although Victoria isn't a foreign country it may seem foreign sometimes now that you've gotten used to foreign ways!

Good luck settling in and with the next step!