Truthfully Christmas was a bit lackluster. Nikolai and Grammy have both been suffering from a flu/cold for a few days, and Nikolai woke up fevered and listless. He didn't care about presents or Santa or the crumbs of cookies or anything that involved him moving from his prone position on the couch.

As the only child in the house we depended on his enthusiasm to bring about the Christmas cheer!  So I resulted to drugs to bring down his fever... just one dose to get him through the gift opening.  It worked! We had about 4 hours of energy before he crashed again.

Anyways, today Brad and I are off on an adventure. The kind of adventure where it's safest to leave our laptop and toddler behind. We don't feel too guilty about leaving a sick toddler because Nikolai woke up full of excitement for the Christmas toys he'd received yesterday. Hopefully that was the end of his flu! 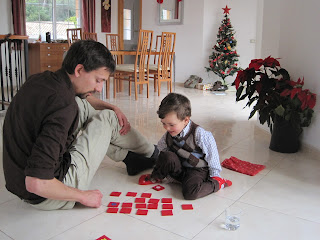 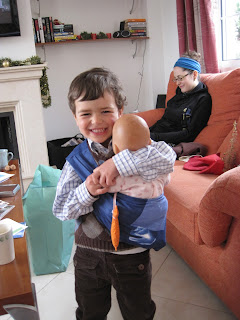