Well, it's time to reveal my big surprise!! (And only a surprise for those of you who don't talk to me regularly). This past weekend... we MOVED!

But this is not a move back to Canada, it's something more sideways then that.

Maynooth is a town that has a Main street which is literally 2 blocks long. So when we moved from one end of town, to the other... it only took us a total of 1.5 hours (5 car loads of stuff... amazing when you consider that 20 months ago we arrived with only 5 suitcases of stuff!)

-"Why move?" Well that's the big question, one that I asked myself a lot during the process. But let's start with a background on the apartment that we're now renting before delving into the nitty gritty. The apartment belongs to a friend of mine, who was living here up until last week with her husband and their two sons (eldest is Nikolai's friend). But her third child is due in 10 days time, so they'd definitely outgrown this two bedroom apartment.

-"But Emillie, aren't you set to be returning to Canada in December?" Well, that could be true. But Brad's contract here was extended until next August, so until he gets a job we will probably stay put, because an income in Ireland is better than no income in Canada.

-"But why move from a 3 bedroom house, with two courtyards and a big garden to a small two bedroom apartment?"

Well, this is the easy part. Our new apartment is located on top of the only mall in Maynooth. And though it sounds pretty industrial for my sojourn in Ireland, it actually feels more Mediterranean when you're actually up here. The roof of a mall is a warm place to be. And this is a lovely landscaped roof (as seen below). In fact it's so warm that we have 4 windows open at the moment, and I'm quite comfortable sitting still at my computer. However, when we went back to our old place to clean (on this same 15 C day) we left on our outdoor sweaters despite the exertion of cleaning. The temperature difference is that great. So it's no wonder that I was keen to move before embarking on my 3rd Irish winter. And since we're renting from a friend, no lease is required. 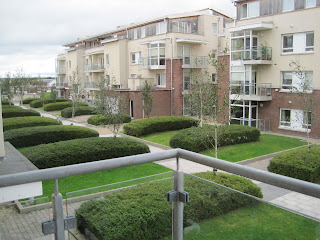 The other major benefit to our new location is the view. We went from a view of an 18th century cemetery wall... 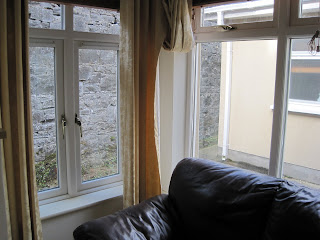 to a view of a 13th century castle (from our kitchen and livingroom windows, the bedrooms overlook the commons). A little aside on the Castle... it is an OPW site, and belonged to the Geraldine clan. We're renting from a Fitzgerald... so definitely a descendant of the original castle owners. What's more, I showed paintings at the Geraldine festival held at the castle in July, and ended up with my photo in the Maynooth newsletter. So far, this has only resulted in one elderly man recognizing me on the street and inviting me in to apraise his photography. 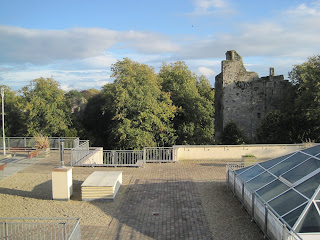 And if you were planning on visiting us, never fear, we still have two double beds, two bathrooms and two balconies, so there's plenty of space! However, this move does leave us with a technical question... do I now need to change the name of my blog to 6 Earl's Court?!?
Posted by Emillie at 2:30 PM

What?! Windows open?! So glad you will finally be warm! And I won't freeze when I come to visit! :)