Leafy greens from the beyond

My friend Ashling returned from Galway with a bag of dulse (dillisk) for me. Now, I am actually quite familiar with seaweed, as it's a fairly familiar product on BC's west coast. Nori, kombu, seaweed salad, macro kelp...

but... my seaweed was always... well... packaged, to say the least. You know, dried out, flattened, cleaned and prepared for my limited seaweed cooking. But this bag of seaweed was a bit more "freshly harvested" than I'm used to... and I wasn't really sure what I needed to do to make it look a little more like something packaged (beyond the obvious removal of barnacles).

So I called up Ashling and asked her "what do you do with dulse?" And her reply was confident and perhaps a bit offhanded, like I'd simply asked her what I was supposed to do with a turnip. Apparently I add it to winter soups and stews. And some people enjoy deep frying it.

Back to assess the bag, now a more permanent fixture in my larder. Deep purple, leafy with some hard stringy bits, and a distinct sheen of salt and sand.

So I asked Rosie at the farmer's market... "Winter soups and stews."

....Ok, but do I have to clean it? "Well, if Ashling got it from Galway Bay then you should probably clean it".

But the answers to my questioning came from another of Rosie's regulars. An older woman who had perhaps seen a bit of famine in her time, as she was busy telling Rosie about how eating the skin of an orange peel was very nutritious, and a good source of pectin for gelling. Her general recommendation was to puree the whole orange up in a blender, and the resulting goo would be quite a thick drink (a bit bitter, but at least you'd get all the nutrition out of the fruit).

And here is her advice on how to prepare seaweed:

First, thoroughly wash the seaweed, otherwise it would be excessively salty (though, apparently, eating dried, unwashed, salty dulse is a tasty snack too).

Then you can use it right away, sauteed up like any other leafy green. Otherwise you need to dry it out so that it can be added to soups/stews for the next 6 months. Below is my picture of before drying out. 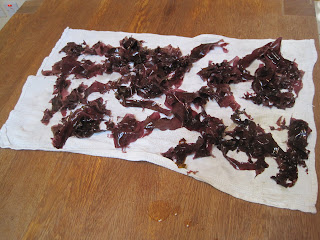 And after drying out. 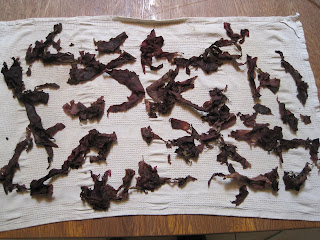 I also used some of the freshly washed stuff in a side dish with kale. It was so tasty that Nikolai easily cleaned it off his plate, Brad's requesting an encore, and I failed to remember to take the picture until I'd already eaten most of it. 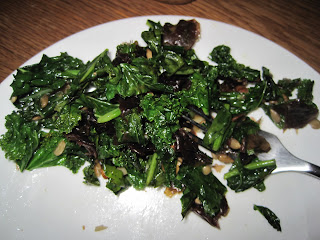 Saute, in oil, about 6 cups of chopped up kale until it is wilted. Then add two cloves of diced garlic, 1/2 a cup of fresh dulse (or soaked dried dulse) and saute till kale starts to become crispy and garlic is cooked. Then add tamari (or soya sauce) to taste (about 1 tbsp). Top with toasted sesame seeds or sunflower seeds.

FYI: the salt should be provided by the tamari sauce, not the seaweed. Also, you could easily add any vegetables that suit you to this basic mix, but I'd say at least one green is required to keep the dulse from looking too alien.