Going to London the old-fashioned way

For our latest trip to visit Claire in London, we decided to go the slow way. There is something called the SailRail pass, which allows you to take the ferry from Dublin to Holyhead, and then to anywhere in the UK (via train) for about €40 (depending on end destination, and which ferry you choose to take). We took the slow ferry and went to Oxford. After spending a few nights in Oxford, we then took a cheap pre-booked train to London. The whole thing... all inclusive, cost us about €90 for our family.

It was quite the adventure for poor Nikolai, and would have been faster if we'd just gone directly to London (there's a direct train from Holyhead to London which only takes 4 hours). Anyways, here's a quick photoblog to document our journey.

First we had to take the bus from Maynooth to Dublin... leaving Maynooth at 6:05am. 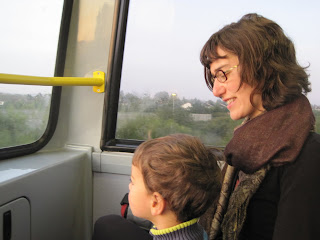 Then we caught the free StenaLine bus from central Dublin (Westmoreland Row) to Dublin Port. (Nikolai likes to ride on the top of the bus.) 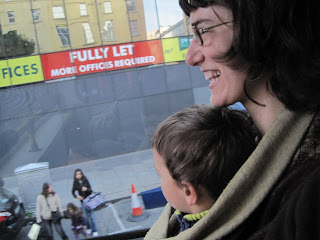 The ferry ride took 3 hours and was quite nice. Very similar in size to a BC ferry, but clearly it was repurposed from an overnight ferry as it had many sleeping rooms. They had a cafe, restaurant, "exclusive lounge", bar (not open in the morning), movie theater (tickets were €8), shop, and a children's area. Our only complaint would be that the children's area was just a TV room, with no toys. They did have someone dress up as Curious George and hand out balloons... But I would have preferred the small playground, like those found on BC ferries, to the continuous loop of Curious George videos. 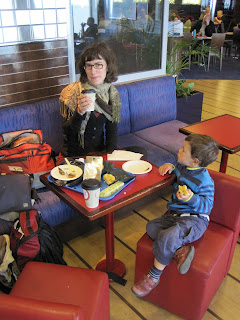 To get on and off the ferry, foot passengers had to ride on a bus. 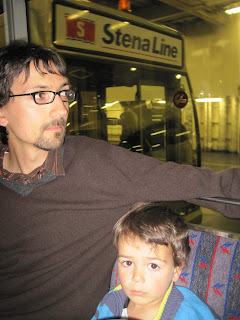 After a quick lunch break in Holyhead, we started our train journey. From Holyhead to Chester via Arriva Trains Wales. 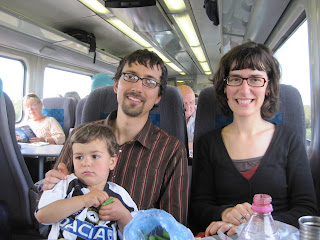 From Chester to Crewe with the posh Virgin Trains. 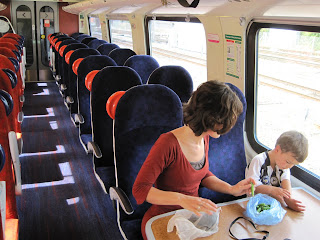 From Crewe to Birmingham with London Midland. 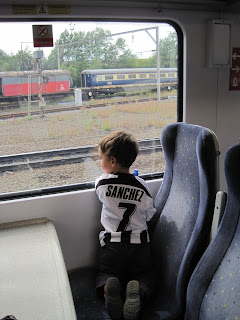 Then from Birmingham to Oxford with Cross Country. (That train was particularly packed, hence the extended arm photo.) 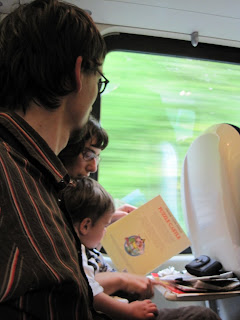 We then took the bus from Central Oxford to our B&B located 2 miles out of town... we did this after dinner, and Nikolai was quite done for the day. All in all it took just about 12 hours to get from home to our destination. It would have been much quicker if Oxford wasn't so far off the mainline to London. Regardless, it was a grand way to travel, and I think we'd do it again, since it was much "easier" than flying. (Though it took more time, it was much less hassle). 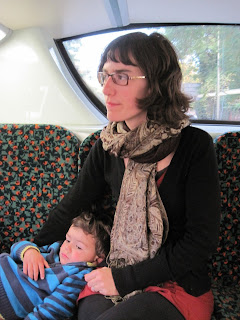 After spending two nights in Oxford, we then took a train into London Paddington. 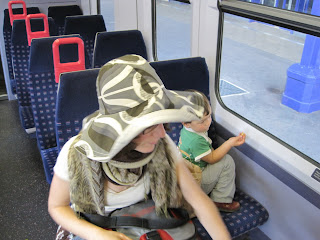 From then on our travel involved two things... walking about the city with Nikolai on our back. 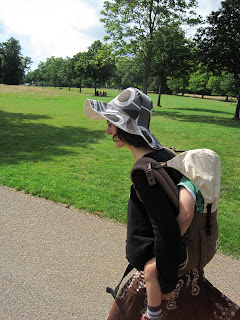 And taking the infamous London Tube. (Yes, that's Auntie Claire sitting next to Nikolai. Recognize that worried look from Nikolai's baby face days? He found the noise, heat and bustle of the tube to be a wee bit stressful). 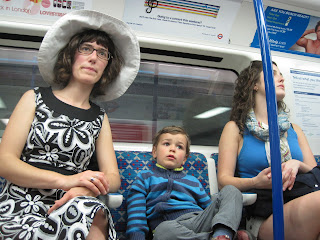 Love seeing a post with all the pictures! What a long journey! I admire your willingness to do it with a little one!

loved seeing all the photos...Nikolai is getting to be such a big boy!!! xo Diana