While we wait for the world to turn

Unfortunately I feel like I have to address the continuous economic doom and gloom that greets me every morning when the radio turns on. (Given that this blog is about Ireland, and the Irish economy is certainly a factor in the doom and gloom). Europe is on the brink of collapse and the USA needs to raise the debt limit, and I am left wondering when...

When will this end? Because right now, it seems like this crisis will never end. Clearly the EU has three choices:

1. Continue on the current path of not really doing anything (bailout, rules and conditions, etc.). This is probably the most likely outcome of today's summit, as it's the easiest outcome. Though arguably, not a very effective solution as it hasn't really been working.

2. Kick Greece (and potentially Ireland, Portugal, and the rest of them) out of the monetary union. Basically save the EU currency at the expense of a few countries. (Hey, Greece clearly lied about their financial situation to get into the EU, so they could definitely be kicked out.) The only trick is that Germany and France are most exposed to Greece's debt. So a failed Greece would probably cause the EU to suffer anyways.

3. Create stronger ties linking the EU financially and politically. Basically turn the EU into something more like the USA. This would strengthen the currency, and leave the failing countries less exposed to their own debt issues as they are absorbed by the whole EU. A fairly Utopian idea... but... it would be hard to get buy in from everyone. Each EU country is quite proud of their individuality and sovereignty, which would probably be infringed upon by a more centralized currency. (The Greeks would be mad at Brussels for making them pay taxes. The Germans would be annoyed at having their taxes go to pay for health care in Ireland and Spain. The French would just be mad at everyone for not being French. And the Brits probably wouldn't want to play.)

So I predict Option #1 will be the outcome from the meetings this week... and the meetings next month... and the fall round of meetings... etc. etc. until people just get so angry with the whole system that we have a bit of a Louis XVI moment. I frankly don't want a Louis XVI moment... but unless someone's willing to brave the challenges of actually RESTRUCTURING the current economic system, I don't really see any way out of it.

And in my crystal ball for the US debt issues... well... EVERYONE else on the planet pays sales tax and has higher income tax rates (please note the link is from 2005, so it's definitely not accurate in regards to Ireland!)... so I predict that tax rates will probably start to look more like those in the rest of the western economies.

Aren't blogs great? I can shoot my mouth off about a ton of really complicated issues that I don't have a good grasp of (my MSc in Neuroscience does not make me an economist) and feel like I've actually said something meaningful! I look forward (?) to hearing the outcome of today's meetings during my 10 minutes of business news tomorrow morning.

And on that "happy" note, I'll leave you with a glass of garden fresh iced tea! 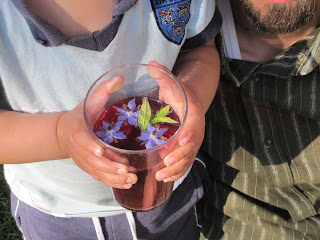 Your comments at the end about the French and British were spot on :) As for the U.S, Obama simply needs to pull his head out as we are only prolonging the inevitable and heading down a very slippery slope.