When Summer is one day in June 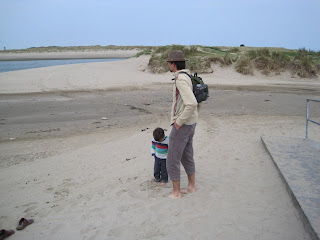 After having spent 8 days touring around Ireland's "South Coast", the sun and heat finally arrived. We spent all of Thursday and Friday playing in the paddling pool in our back garden, and with the arrival of Saturday we felt that it was finally time to make good on a promise to Nikolai.

Unfortunately, (and perhaps fortunately for those of us actually cycling) the weather never crept up above 18C on that trip. But with two days of hot sun under our belts this week, we decided it was time to check out Dublin's beach scene!

And being rather coastal Dublin has a number of beaches: so here is a brief review of the "beaches" we've explored thus far (from North to South):

Malahide: has a huge sandy dune, which although it has beautiful sand, it's not so good for swimming (strong currents and poor water quality).

Howth: has a few "beaches" but the best one is the "hole in the wall" located behind the train station. A beautiful view of the Howth Eye and nice/rock combo makes this a favorite with Nikolai. (His primary beach hobby is throwing rocks into water). This beach is not one of the maintained beaches, so don't be surprised to find some litter.

North Bull Island: We've only cycled past Dollymount Strand, but apparently it is good for Kite Surfing, so I imagine it's got good sand, but not great for swimming.

Sandymount Strand: was amazing to look at, but again not so good for swimming. It is a huge sandy plateau, that even at high tide, would not have much depth, but at low tide you could walk for ages on the wet sand. We only saw this on a from the DART (train) as our destination was a bit further south.

Seapoint: was advertised as good for swimming in our map book and online. That is probably true. However, it is all rocks, so not very good for Nikolai! After realizing this we hopped back on the DART to continue to the next set of beaches.

Sandycove and the Forty Foot pool: After discovering that neither Seapoint nor Sandymount would provide us with the bathing experience we were looking for we suffered a bit of a crisis (when we asked Seapoint locals about a beach for swimming we were pointed to Killiney , which was quite a bit further away). But this adventure did not end at Killiney...

As those of you who know Dylan may recall, Dylan is an adventurous sort. His main hobbies have traditionally been snowboarding (all over the world) and climbing (all over the world). As he is mellowing with age, he's decided to add a much safer extreme hobby to his arsenal... nude swimming. Thus when Dylan spent his one (and only) day in Dublin he took the DART out to the Forty Foot Pool, traditionally a nude bathing place. In modern times, such as these, togs (bathing suits) are required (unless you swim before 9am). But Dylan still got to experience a bit of the adventurous thrill, by swimming with some stinging jellyfish.

Anyhow, we did not go to the Forty Foot Pool, but rather the lifeguarded Sandycove right next door. The beach was small, and packed with locals. The sand quality was fairly coarse. But the beach vibe was pumping... with snorkeling, scuba diving, high jumping, sandcastles and ice cream. Nikolai was pretty keen, right up until he actually stuck his foot in the water. I guess you have to be a local (or loco) to enjoy the North Atlantic water!

Malahide is above and Sandycove is below. 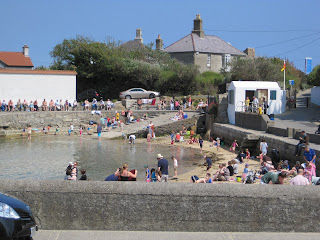