I want to ride my bicycle! 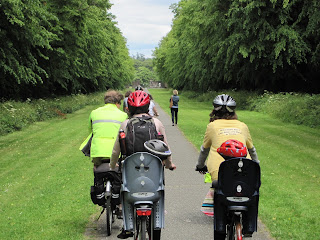 To start off with... Ireland, despite having fabulous cycling weather (temperate and without sustained rain), rather flat terrain (just skip Sally Gap and you'll be grand), and many country roads, suffers from a pervasive car-centred culture. (Carhead as those of us in the protest cycling community would call it. -We used to spend a LOT of our free time in the car-free cycling culture of Vancouver.) Despite Bike-to-Work campaigns, etc. in general, the Irish view bikes as a weekend hobby rather than a viable means of transportation.

The car-centred culture is expressed in several ways:

-Cars don't know how to deal with bikes... they either honk rudely (rare, as being rude is not really an Irish trait) or they treat you like you were a pedestrian or a horseback rider (follow behind for ages until they have tons of space to pass)

-Drivers never expect bikes to behave like traffic, so you can't just assume that the rules of the road will apply, you need to wait and see what the drivers indicate before you can assume it's your turn to go (even if it is your turn). (We've even been told to ride on the sidewalk, simply because the driver was too afraid to pass us).

-Cars (legally or not) will park anywhere that is not PHYSICALLY blocked off by a pylon or something. This is usually the first thing that our visitors notice as they leave Carton Square for a walk up Main Street. All the cars are parked on the sidewalk along Dillon's Row. This is perhaps most frustrating at the gates to the North Campus at NUIM, as there is absolutely NO sidewalk as cars park all along the walkways, leaving the many pedestrian students to enter campus on via the car access gate.

-Cross walks are only suggestions, and often cars will not stop despite a flashing red light. ("No, honey, the green walking man doesn't ALWAYS mean you can cross"). Intersections let all the cars go one way, then the cars in the other direction get to go, then the cars can turn left, then the cars can turn right... and then... after several minutes of waiting... you can cross the road. I believe that J-walking is the national hobby, as it's really the only safe way to cross! And this is likely because the cars are very polite, and simply looking interested in crossing the road (even half a block away from a cross walk) will often result in cars stopping to let you go.

So with that context in mind, Ireland's National Bike Week campaign is more about getting people to bike, rather than promoting cycling as a viable alternative to cars in Ireland. And the Maynooth campaign is no different. It happens to be organized by Brad's Sunday crew (arguably mostly carheads themselves, as they use cars for daily life and cycling as a way to escape the family on Sunday mornings...), and as such, Brad and I were de-facto organizers ourselves.

Bike week kicked off with a ride to the hydro-electic dam in Leixlip. Now anyone from Ireland is probably left wondering "what dam in Leixlip?" and anyone outside of Ireland is probably wondering "but I didn't think it was that hilly?" And the punchline is... that the dam only produces 4 MW of electricity (for those of you not so up on these things, Brad grew up the Columbia River which has 14 dams ranging 185 MW to 6,809MW).

Clearly, the primary function of the dam is not to actually produce electricity, rather it serves to keep a fairly constant level of water on the Liffey in Dublin. It was originally built in 1945, and we were given a thorough a tour of the facilities (inside and out), so all in all a grand day out. Brad was most impressed with the nifty "fish elevator" which fills every two hours to move fish from the bottom of the dam to the lake at the top!

The next Bike Week Maynooth event was Brad's talk on Cycling Touring in Nova Scotia. He simply ignored the Nova Scotia part (not having actually been there himself) and focused on the cycle touring part. His talk must have been quite inspirational, as we already know he's convinced one family to make their summer vacation a cycle tour of County Clare.

The final Bike Week Event was the Family Cycle Ride to Kilcock. It just so happened to fall on Nikolai's 3rd Birthday, so he was quite excited by all the well wishers and prezzies. The turn out was pretty good for Maynooth, in total 55 people came, with children from all the schools in Maynooth. The weather was beautiful, and Kilcock was celebrating their annual canal festival, so our arrival was greeted with a traditional music circle (one of the cyclists ditched the group to join in), cardboard boat racing and kayak-water polo (though in Ireland kayak's are called canoes and vice-versa).

--Actually Blogger is not uploading photos at the moment, so these will have to wait until sometime in the future--

The picture above is of Nikolai and I (in the cool bike-week organizer shirt... why do these things only come in extra large?) cycling with Aisling and Layla. The two tots on the back had so much fun chatting all the way to Leixlip and back. Below is a picture taken from the top of the Leixlip dam. 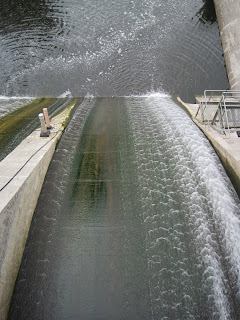 Love this post. I have stopped being surprised at where people chose to park around here! However, I am guilty of being one of those cars who "follows for ages.." I am simply terrified of clipping a cylclist!