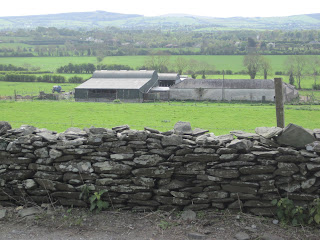 And while our spring has been packed with visitors and visiting, we have been equally avid in our cycling training. Every free weekend day results in a trip to somewhere... I've been cycling in the evenings with my pair of A(i)s(h)lings... and Brad's been out training for the Wicklow 2(1)00 with his friends. On this weekend of anticipation (as we will be away traveling for the next three weekends --I am anticipating my "ode to a toddler who will not sleep in a hotel" blog) I have three tails of cycling:

Arthur Guinness's Grave
While we've done a number of interesting local treks (Naas's Grand Canal, the Wonderful Barn, Captains' Hill) perhaps the most notable destination -from a touristic point of view was Arthur Guinness' Grave. It is perhaps most notable for it's lack of notoriety. Located up Lyons Hill, in an abandoned church yard, in the middle of a sheep field. The Grave itself is found within the walls of the "church" on the right hand side of what was once probably the nave of a rather small church. It is generally unremarkable... other than the occasional bottle of Guinness left at it's side. A beautiful view, rolling hills, friendly neighbouring horses and hand piled stone walls make this trek worth trekking. Of note, you can climb the tower in the church... but Nikolai and I were both to sensible for that!

Feminists Ride Bikes
The Maynooth Cycling Campaign, of which Brad is a de-facto member due to proximity with the main organizer, basically is focused on trying to get more people cycling. They have a particularly difficult time getting women to cycle, and have asked me to come out and "represent" on the teen rides. So perhaps I'm a de-facto member too?

Anyways, most of the Lycra clad butts cycling around Kildare on the weekend are males. But I think I've figured out one of the reasons why groups of women aren't signing up for cycling... Last week, when Aisling, Ashling and I were on our evening ride, a car load of young men pulled up and called out to us. Being rather deaf... I'm not sure what was said... but from my friends embarrassed faces I gather they were propositioning us.

It seems to be a very acceptable phenomenon... The bicycle incident was fairly mild compared to the harassment we received at the pub during the toddler group's "Mom's Night Out". So I've decided to cling to my feminist roots, by claiming my right to cycle (Lycra clad or otherwise).

The Torrential Downpour
The highlight of our cycle training, thus far, happened on Saturday night when we got to cycle home in a torrential downpour. This is a rare enough thing in Ireland... however, we knew the rain was coming as we could see the storm sweeping in from the Wicklow mountains. Our first thought was to race home, but we soon realized that "out pacing" the rain was not going to be possible. When it was time to batten down the hatches... we relocated Nikolai to a safer (and dryer) location in the trailer and threw on our raincoats.

It was a moment of complete awe, as we watched the sheets of rain come towards us from across a farmer's fields. And then it was upon us... even though we got thoroughly soaked (as Nikolai put it, "you look like you took a bath in the rain!!") we were in utter bliss the whole way home. This was the rain of so many memories... as we both were stalwart cycle commuters. With an average of 150mm of rain a month in Vancouver's winter, cycling home in the rain was a full sized helping of nostalgia for us (clearly I'm not a copy writer for Tourism Vancouver)!

I can think of only one thing that perhaps truly defines what it means to be Canadian... something that can encompass us all... no matter our heritage, or where we live in the giant country (big enough to eat the whole continent of Europe several times over)... to be Canadian is to not be afraid of inclement weather. In fact I'd go one more than that, to be Canadian is to embrace inclement weather! Neigh on everyone of us has gone out in -20C weather... and many have pulled on our long underwear for -40C (with a Nikolai in my belly) simply to watch the sundogs or aurora borealis.

And Vancouver boasts a 4% cycle commuter rate, despite the constant assurance of rain. Brad and I own: shoe covers, wet pants, cycle coats (fully ventable and waterproof), gloves, ear covers, neck warmers and a belly warmer (me) all so that we could get our daily dose of exercise in the form of a bike. So a ten minute deluge in the beautiful rolling fields of Kildare can be nothing more then a moment of bliss. And since it's Mother's Day in Canada, I will indulge my mothering side a bit... and say "I am so glad that we could share this moment with Nikolai; because what could be more important to becoming a well rounded person than to see your parents laughing joyfully while cycling in the rain?".

Above is the piled stone fencing and rolling hills. Below is the tumbled down church and stone grave markers, and a close up of the illegible grave stone. 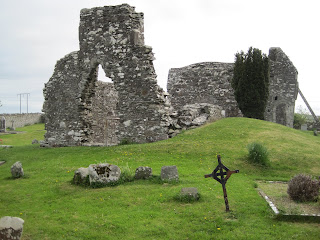 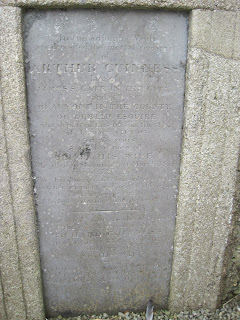