A trip to middle earth 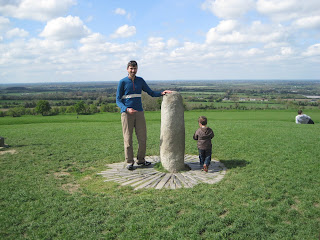 Well, I decided to ACTUALLY test my abilities (and Nikolai's staying power) for our upcoming cycle tour in a more concrete way. So on Sunday we plotted a slightly more ambitious route to the Hill of Tara (64 km return).

Cycling in Ireland is a constant joy. Smaller roads abound, with beautiful rural scenery to enjoy at every turn, and best of all... the weather usually cooperates by being moderate in all regards. Cycling with a toddler involves endless questioning, particularly regarding "where is da hillatarra?" (and I'm not sure if that's toddler-ease, or a Hibernian accent).

For this particular trip we let Nikolai choose between riding in the trailer (behind Brad) or in the bike seat (behind me). We did this to see which he'd prefer for the eventual cycle tour. The overwhelming preference was for the seat on the back of my bike (and I don't think my shoulders will forgive me for the ride for a few days to come!) I figured that would be his preference as he can have a better view, and full conversational participation from the bike seat. Regardless, we'll still have to bring the trailer... because it's impossible to balance a sleeping toddler in a bike seat. But at least we know what it will take to keep him happy!

The Hill of Tara is not much more than a field filled with sheep (the visitor's centre, apparently, wont be opening until sometime closer to summer). But amongst the sheep dung, lambs and ewes lies a number of interesting mounds and troughs. An occasional marker has been stuck in the ground, to let you know that this mound was the royal throne or the mound of hostages.

However, the power and spirit of the location settles deeper than simple facts of historical locations. To start off with, from the hill you have a clear vantage stretching out to the horizon in all directions (to think I hauled a 35 lbs mass, bobbing on the back of my bike much like an off-kiltered gyroscope, up that hill!) It's reverence is evident from the historical importance of the location. Starting off as a prehistoric passage tomb, it then was the location for the Throne of Ireland, with over 142 kings reigning there in the pre-Christian eras. The location was said to be the sacred dwelling place for the gods, and a provided an entrance to the otherworld.

It is clear that Christan's also felt the power of the site, as St. Patrick went to the Hill of Tara to confront the pagans at their most sacred site. As well more recent Christan relics dot the site, and the visitors' Centre is actually located in a deconsecrated church.

Despite the gorgeous weather, it was the cafe and gift shop that were brimming with tourists and we invariably had the mounds mostly to ourselves.

The picture above is of the coronation stone (and yes, it was purposefully phallic in nature. The throne was not gained through inheritance, but rather through power). The picture below involved Brad "discovering" the wide screen option on our camera. 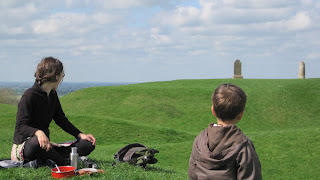