A Journey to the North 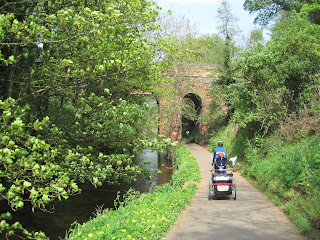 I generally approach every travel experience in two ways: a breakdown of what we did, and a look at the differences and similarities in culture. Frankly, I'm a bit uncertain about doing the latter with Belfast, as it is naturally full of controversy... and how could I, after only 3 days know that much about Belfast.

So to start: the sights and sounds. The train ride was lovely... only €20 return (book one month in advance for these fares). Our bikes were locked into a special "guards car". And no, we didn't need our passports, and there weren't any security checks at the train station. Basically it was exactly like taking the train to Maynooth (even uses the same platform!). It's definitely easier to take the train to Northern Ireland (NI) than it would be to go between the USA and Canada. We only knew that we'd crossed the border because our cellphone sent us a text telling us of the change in service providers.

When you arrive in any new city it seems so busy, large and unfathomable. And arriving on bike with your toddler in tow makes it even more stressful to meager into new traffic patterns (mother bear instincts are on high alert). But NI has made a conscientious effort to encourage cycling. Bike lanes are everywhere. At the tourism information bureau (or Welcome Centre, as it's called) we were given a cycle map for Belfast, and maps for routes that are plotted all over Ulster (including down into the Republic. It was so well done, I'm not sure why Eire isn't copying this tourism cache. Ireland, honestly, has the BEST cycling of anywhere we've been, and considering our cycling touring record, that's saying A LOT).

So we spent one day on the Lagan and Lough cycle way. The hostess at Cherryville B&B recommended heading to Lisburn, but we thought the coast might be a nicer view. So we started out by heading along the coast to the North of Belfast... and after getting a bit lost amongst all the heavy the industry... we decided that perhaps Locals Know Best... so we turned around and headed upriver to Lisburn. That proved to be a much better idea. The route was completely car-free, and followed along rolling farmyards and a bird sanctuary. Lisburn itself doesn't have much to boast beyond a quaint shopping street. However, it did have the one thing we were looking for. A playground. Not just any playground. A complete "oh wow" style playground. And I would imagine it's the largest on this Island. It's as though the city council simply opened the playground catalogue and decided to take one of everything.

We also spent time in Belfast proper... doing a few of the touristy things. The shopping was good, but I'm not sure that the famously "lower prices" are exactly true. The Value Added Tax may be a bit lower... but with the loss in currency exchange, I don't think shopping in Belfast is all that is advertised. Besides which... the shopping district of Belfast seemed to be pretty much identical to that of Dublin... clearly a feat of our global market. (Though perhaps an appetite for change is in the air?)

Here's a laundry list of sites, which we visited:

-City Hall (a ridiculously ostentatious purpose built building). They had a small exhibit on the Titanic, and on the Blitz. Both interesting... but somehow lacking in substance.

-The Linen Hall Library (your basic library, Nikolai appreciated the children's section). They had a small exhibit on WWII and some political posters. Again, very small in scope.

-The Viewing Dome. This is located at the top of a shopping mall; thus it is free. It offers a nice view of the city, but it is only about 4 storey high.

-We ditched the pressure of a Black taxi tour (I couldn't see Nikolai sitting on my lap in a cab for an hour) and cycled the "peace line" ourselves. Perfectly safe to do so, though we did remove the Kildare flag from our trailer for the Unionist neighbourhoods.

-The Botanic Garden. A beautiful park, but no where near the scope of the Botanic Gardens in Dublin. However, it does have a very "hip vibe" (aren't I old?) as it's adjacent to Queen's University and was basically filled with sun-catching students.

Now for the photos... (never fear, I will probably give an opinionated piece on the city and politics in the next few days). Above is a picture of the beautiful bike path. Below I have a picture of City Hall, and a Dog Toilet. Since the City Hall is the most impressive building in Belfast, and I think everywhere should consider installing Dog Toilets! 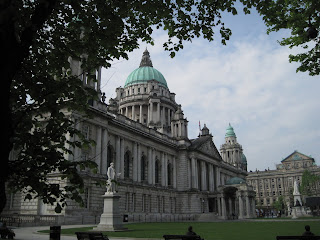 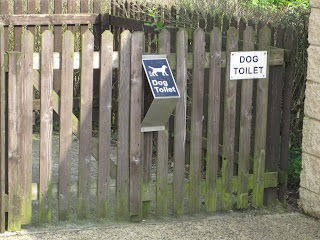