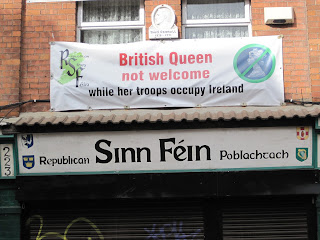 This week we're in for a boring post... but I assure you, very few boring posts will follow in the next few months. We are neigh on fully booked till mid-June now, so I will certainly have lots to say (the hard part will be finding the time to say it)! It all starts this weekend with the return of Claire and my attempt at making a goat cheesecake, as her birthday request.

Anyways, the Irish census is: statistic-y, comprehensive, historical in scope... and actually rather interesting if you have a brain that operates anything like mine. What's more... we'll be having one on April 10th (that's right, Mom & Dad you will be noted forever in Irish history as having been a tourist on that date). I've decided that the best way to approach a topic that is so statistical in scope is to provide straight forward FACTS:

1. This will be the 24th census, since 1841 (trust the Brits to start something so organized... but I guess you need some way to keep tabs on potentially rogue populations).

2. EVERYONE must participate... or "be subject to a fine of up to €25,000). -Not sure if that includes tourists... but our enumerator let us know that our parents would be counted... and because we'll be spending that night in a hotel in Sligo, we will fill out the census in Sligo.

3. It is literally a snapshot of where everyone in the country is on that date. So you only exist in one location on that night (we'll be in Sligo, so we fill out a form in Sligo, not in Maynooth). However, if we were out of the country we would have to fill out a different form... so we would still be counted... just not in Ireland at that time.

4. It is a VERY long form census. Now there's been a bit of news in Canada lately about the long-form census, but I can't imagine it was this long. There are three pages of questions about our HOUSE (from the year built... to type of heating... to the cost... to Internet access). Then there are three pages of information for EACH PERSON in the house (including Nikolai). Questions range from the usual: income, occupation, religion; to a bit more personal: health, commuting (to work), residences (we've lived in Canada). I'm interested to see how we're counted in Sligo... but I guess it's one way of making sure everyone is counted!

5. If you like to play around in historical stats, or if you want to look up your Irish heritage, you can find the 1901 and 1911 census's here.

6. If you work for the government of Canada and are interested in seeing what the Irish census form looks like (though I'm not advocating plagiarism) you can find it here.

7. Lastly, if you want to get lost in the nitty-gritty boring numbers... or want to look at pretty charts (in the pdf reports)... then you can look at the more recent results here. I had a bit of fun poking around myself. I found out that the number of people biking to work has decreased steadily since 1986, with a small increase in 2006; in 2006, there were between 1000 and 10000 Canadians in Ireland. And I am very keen to see the results of this year's census (I wonder if their hiring data analysts?).

The picture is of the Sinn Fein Party offices... already gearing up for the first royal visit since 1911. And we'll be getting Obama too... May certainly will be busy!
Posted by Brad at 1:41 PM