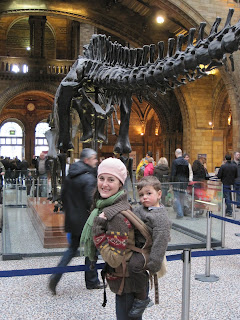 The short 55 minute flight to London was definitely preferable to our longer journey back to Canada. However, the total door-to-door time was 6.5 hours with a lot of transfers. Train-Bus-Plane-Train-Bus However, Nikolai was delighted and entertained by the variety of transport methods, so we had very little complaints about the journey from him.

Being in London reminded me of how small an island we live on. Compared to the vastness of London (8 million in the urban area), Dublin comes across like a small town (1 million in the urban area). However, Claire is staying at the Trafalgar... located in the geographical centre of modern "London" (technically what we think of as London is in fact a number of small cities, and each still maintains their own services... including police! In fact, Big Ben is technically in the City of Westminster... and the London Bobbies on the famous Tower Bridge cannot step off it on the Southwark side.) So while we invested in Oyster Cards for the transit system, we started both of our days off walking from Trafalgar Square.

On Saturday we strode off towards Buckingham Palace, just catching the end of the changing of the Queen's Life Guard at Horse Guards. Then we strolled up through St. James's Park. Nikolai and Brad greatly enjoyed the variety of waterfowl to be seen there (Claire's not so keen on avian life forms, having been chased by chickens and... even more frightening... Canadian Geese as a child.).

We reached Buckingham Palace about 1/2 hour too early for the Changing of the Guards and decided to skip it. We did however see a procession of guards troop around the roundabout, and decided that would suffice. We then hiked up through Knightsbridge, Brompton... and to the Victoria and Albert museum. We poked around there 'till Nikolai woke from his nap (he partied pretty late in the hotel the night before), then we went for lunch.

Brad enjoyed a traditional British ale, and vegetarian fish and chips (complete with mushy peas, satisfying all his British food needs). Claire went for a steak pie... and I had a rather bland veggie burger... apparently the mock fish was the pub's veggie-speciality.

After lunch we went to the Natural History Museum. The lineup out front was about 30 minutes long... but after taking some advice from a guard standing outside, we went around back and entered without a wait at all. (Not sure why everyone wasn't going around to the back entrance... but it was certainly worth the asking.) We liked it all... and avoided the boxes of taxidermy animals... the Dinosaur bones were pretty neat... but we only saw a few as there was another huge line to get into the main dinosaur exhibit.

From there we went to the National Science Museum and had a slight poke around before letting Nikolai play in the toddler zone. We'll definitely have to go back... as the toddler zone was a big hit with Nikolai. He really, really enjoyed the water play exhibit and got soaked from head to toe. It took 2 days for his shoes to finally dry out... he was that soaked. (Note to self: bring a change of clothes next time we visit).

Phew, after that Brad and I dropped Claire and Nikolai off at the hotel for a nap so that we could go out for a shop around Covent Gardens. Then we had dinner at an absolute, 100%, the most fabulous Mexican restaurant I have ever eaten at... called...(Claire can you help?)... anyways, it's highly recommended. The avocado margarita was fantastic... even more so because it was creamy rather than sweet (and I am not a sweet tooth).

With a Saturday that busy (only one tube ride taken!) I think that Sunday will have to wait until later. The photo is of Claire taking a turn carrying Nikolai around... and a dinosaur!
Posted by Emillie at 1:09 PM

So..does Brad have some more holiday time? At first It sounded like just you & Nikolai going to London...now I see that Brad is there too...neat family holiday...how long are you staying??/ xoxo Diana

We went Friday night (post work) and returned Monday morning (pre work). Brad the standard European time off (6 weeks), but didn't want to take time so soon after getting back from Vancouver.