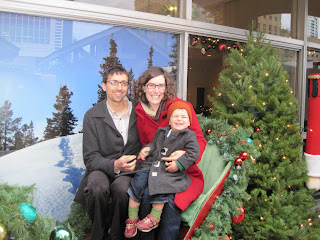 Well, as the official end of Christmas (and etc.) is today, we now move into a more chaotic schedule. With Claire moving her stuff into storage over the next two days, Brad will be lifting. And reception guest arrivals, mean dinners, playdates and catch up time galore.
How does one keep an excitable toddler from going rabid and biting the ankles of the endless new people he supposedly "knows"? I am hoping that a good dose of "Mama Zen", the occasional chocolate bribe, and a healthy dose of "training pants" (versus underwear) may fit the bill. But we'll have to see, because even Christmas day was all too much for Nikolai's two-year-old sensibilities. As he told Uncle Peter, upon being presented a gift, "I already opened lots of presents today at Grammy's" and so that one remained unopened.

The photo was taken at the Vancouver Christmas Market. A bit overpriced... but then again these sorts of things always are. At least the photo was free! (As you can see, someone needs to work on their "fake smile")
Posted by Emillie at 1:33 AM

Have a wonderful reception & catch up with all your friends. Ash