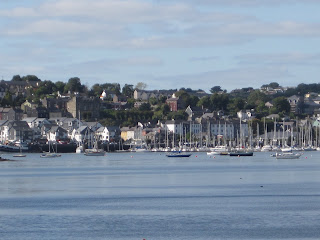 Claire's trip coincided with the "worldwide" Arthur Guinness day celebrations. The actual date of Arthur Guinness's birthday is, in fact, unknown; however, in 1991 the Guinness company chose the date of September 28th apparently to end speculations about the birth date... September 28th also often happens to fall on the first week of term for most Irish Universities... so it would certainly be an apt time to enlist the young drinkers in a "worldwide toast". ~~was anyone across the pond even aware of the celebration?~~

Now Claire, an intrepid Canadian, added the Saint to the beginning of her Arthur's Day explanation, when telling all her colleagues and friends about her trip, prior to leaving Canada. And her intrepid Canadian friends all nodded and accepted Arthur Guinness' saintliness, as most of us are not really aware of any other saints beyond Saint Nicolas and Saint Patrick. Claire only realized her mistake after arriving at a pub for the Arthur's Day celebrations.

Now those of you who know Claire, know that she is quite a connector (and I'm a veritable maven, so if any salesmen out there want to join our team we can definitely change the world) and is able to maintain quite a large roster of contacts. So it should hardly come to anyone as a surprise to know that she has a friend who is a Ph.D. student at NUIM (whom actually introduced Brad into his cycling crew... despite not actually being a part of Brad's cycling crew. His other claim to fame was that he got to go to the Fifa World Cup in South Africa as Captain Morgan's Team Ireland). So, although I took her out with my friends to Brady's for a celebration, she also got to go to the Roost and Mantra with her own friend. Which made our 8 AM departure for Cork the next morning a wee bit rough for Claire... but she is the trooper of the year so she made it.

The train was great and I LOVE IARNOD EIREANN. Such statements often garner looks of disdain from anyone local... but that's because they haven't tried to take a train trip in Canada. (Our trip on Via Rail to Jasper was only 4 hours late, which, from what I've been told, is a relatively small delay.)

Cork is a nice town, with all the typical nice town things... shopping, sights, food, a really great food co-op. Our hotel (billed as a B&B, but we decided that if you have over 20 rooms and a front desk, then you're a hotel) provided lovely large rooms and a great breakfast that comprised eggs from the chickens running in the yard, apples from their orchard, and likely other treats courtesy of their enormous veggie patch. They also get two thumbs up for the solar water heating system. Our tour of Cork included a trip to the Butter museum, which was free as we were there on a Friday, but would otherwise have not been worth the money spent. The famed English market was also overblown in our estimation (perhaps it was because there was a large proportion of butchers, or because we grew up next to Granville Island which has spoiled us for such pleasures).

From Cork we took what was meant to be a quick day trip to Kinsale, but we ended up skipping the Blarney Stone altogether in favor of taking a long walk to Charles Fort (another OPW site worth noting). Kinsale is also worth noting for it's lovely boat filled harbour, loads of high-end funky-artsy shopping and fish and chips. Unfortunately, Desmond Castle, located in the centre of town, was closed due to government cut backs (sigh, a sad blog on AIB may be required).

The photo (one that Brad took) is of Kinsale.
Posted by Emillie at 2:00 PM