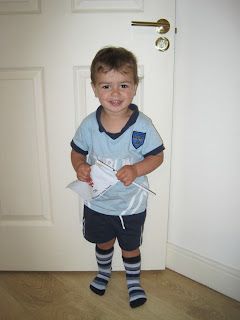 There are three things that, by my estimation, create the culture of modern day Ireland. And despite what you may think, pubs do not an Irishman make.

1) The church (fairly self explanatory... but the catholic church certainly provides much of the local community services, schooling, etc... a topic for another day perhaps.)
2) The weather (the lack of variability in the weather surely plays a factor in the Irish temperament. I find myself becoming more moderate and relaxed in the face of very little extreme weather.)
3) The GAA (and my topic du jour.)

The GAA is an athletics group that is unlike anything I can compare it to in Canada. For starters they only do Irish sports; specifically: Irish Football, Hurling (warning this is a video), Camogie, Handball, and Rounders. They also provide both the local level sporting and the competitive level sporting. First I will discuss the local level of sporting. This is your typical community level sports facilities for children, youth and beer leagues. Every town in Ireland has one (no matter the size, nor how close to another town it is... eg, Maynooth and Kilcock both have GAA clubs, located only a 15 minute bike ride apart), most GAA facilities have a club house, with some amenities. The Maynooth club house has a pub in it where the local toddler playgroup meets. (In other news, I'm now one of the organizers as I'm one of the only parents with a toddler who is neither pregnant nor hauling a baby around). This feels familiar as it is similar to the community centres in Canada... though most community centres have craft rooms and play rooms rather than a pub.

Now the professional level of the GAA pits counties against each other. For example, County Cork beat County Dublin in Football last weekend, and tomorrow County Kildare (our County) will play County Down, with the winner going into the final game against Cork. All of this seems fairly straight forward, sporting-like and all that. What's special is that Ireland is a country of just 4 million people... think about that... BC alone has 4.5 million people. And while Canadians do get out to support their hockey team with verve and vigor, the Irish get out to support their County team with all that vigor and more.

Take 4 million people with 32 counties and still they manage to have enough supporters to have all the swag (flags, banners, jerseys, air fresheners, etc... does anyone want a county Kildare flag or wind sock to hang out their car window? We bought one for the bike trailer). The Croke Park stadium holds over 80,000 fans and they still manage to sell out. Examples of team support are boundless, for example, a friend of ours supports his home county of Meath and he and his father don't miss a single game (regardless of the sport). And last week one of the Kilkenny hurling players came back for his first practice session post-injury to the support of 8,000 fans. Kilkenny only has a population of 87,558! I'm certain that all the pubs will be full when we go out to watch the Kildare game tomorrow (I really hope we win!!)

What makes it so special is that it is also so local in nature. The physio in Kilcock that both Elaine and Ashling have been seeing also does the Kilcock team!

This support, of what is essentially amateur sport, is something that we have sadly lost in North America. Although we may go out to a few Canadians games every season, and the Castlegar Rebels get some support, it hardly matches the fervor of the GAA. I think the death of this sporting tradition came at the hand of Major League sports. Now, rather than supporting their local teams, everyone stays at home and watches the Canucks, and something is lost in the individual support of a meaningful LOCAL team. It provides local pride, interest and shared experience, in a place where everyone can show up to watch a team practice. Instead, we support our major league teams, even in a city that is a plane ride away, with tickets that cost far too much for you and your kid to attend every game.

**We lost today, but it was a very close game. Here's hoping for Bronze, as we play Dublin next.**
Posted by Emillie at 1:23 PM