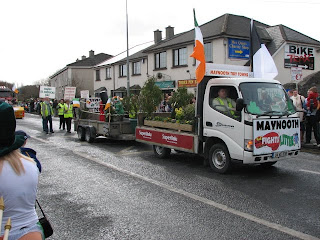 We went to the Maynooth Parade and it was reminiscent of my childhood in Erin. Not because of the Irish name of that small Ontario town, but rather because I always was in the very "homemade" Girl Guide float for the xmas parade (it usually featured a secular xmas scene on a hay bale covered wagon pulled by a tractor).

This year's winner of the best float was the Tidy Towns Committee (featured in the photo above). The parade also included numerous sports teams and social clubs. Two pipe bands, St. Mary's Bad, 3 sets of traditional Irish dancing groups, and an antique car and tractor parade.

After the parade we went to the local pub for a few pints of Guinness. And I learned a few interesting St. Patrick's day facts:

1. Saint Patrick became a saint because he rid Ireland of snakes. Maynooth celebrated this fact by having a reptile show in the mall after the parade. The grocery stores celebrate this fact by selling clover and snake gummies.
2. Apparently, Lent doesn't count on St. Patrick's Day, which means the pub is full of people who've given up the drink for Lent.
3. Only Americans (and thus I infer Canadians too) would call it St. Paddy's day.
4. Everyone dresses up for the day. This mostly takes the form of silly hats, face paint, etc., but they also wear living clumps of clover (special broaches are sold for this purpose).
5. I also learned the difference between a pub that serves Guinness and a pub that serves a good pint of Guinness. Good pints leave rings of foam in the glass as you drink... otherwise the Guinness has gone "sour".

Perhaps next year we'll brave the crowds in Dublin. Who's going to join us?
Posted by Emillie at 3:13 PM

What is Mrs. Quinn's Charity Shop?