Some walls are better left unscaled 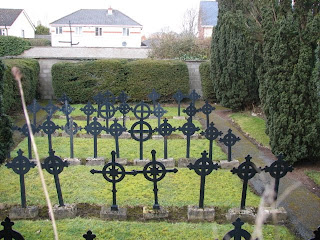 Friday night we had our first official honest-to-goodness, Maynooth born-and-raised family over for dinner. The children played well (as well as two terrible twos can), the talk was flowing and a generally good time was had by all. After exploring our rather odd house, the couple postulated about what was on the other side of our wall. The wall was definitely from the old Convent (converted into Dublin commuter apartments in recent years) and they postulated from the trees peaking over the fence that it was the convent cemetery on the other side.

I guess the punchline of this story was ruined by the inclusion of a photo. However, in this case a photo does provide 1,000 words. The next morning, Brad scaled the wall, camera in hand, to see what was on the other side. I would have to say that the results are fairly creepy.

Perhaps if I were a bit more goth I would be excited to live next to a cemetery. And if I were a normal, sane adult then I would be non-plused by living next to a cemetery. ~ as my dad put it "at least you know your neighbours will be quiet"~ However, I have higher than average schizotypy and being terrified of ghosts is my personal speciality. (As anyone who was in the theater while I watched the Sixth Sense knows about my over developed sense of fear). So I spent all day yesterday trying to figure out how I could break my lease and move out ASAP.

After a night spent in contemplation of the situation, I have decided that we don't have to move. Until this point, I actually thought it was Fairies that were randomly moving things around our apartment, given that we were in Ireland and all. Brad would argue that Nikolai has just started messing about in our personal affects. I guess both ideas are possible, however, it is now most probable that some of the sisters from the graveyard are coming over to clean up the house while we're out. Yes, our ghosts tidy up our house. You can see why I thought Fairies were more likely than a 19 month old. So considering that we have been here almost 2 months, and the only problem we've had with our neighbours is the occasional removal of the bookmarks from our books (nearly a daily problem), I figure I can live with our neighbours. Besides, Nikolai's room is between the wall and my room, so I figure he can protect me!
Posted by Emillie at 1:19 PM